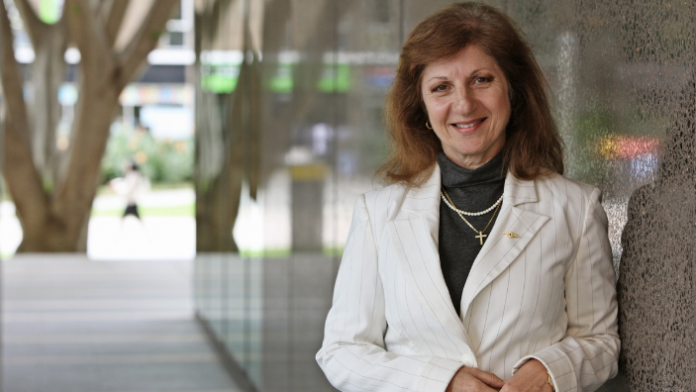 A quick Google search on Emeritus Professor Maria Skyllas-Kazacos from the University of New South Wales’ School of Chemical Sciences and Engineering, uncovers what many consider her greatest achievements: She was one of Australia’s first female professors in chemical engineering and the pioneer of the Vanadium Redox Battery in the late 1980’s.

It’s these accomplishments which saw me reach out to Professor Skyllas-Kazacos for her to feature in The Greek Herald’s special ’21 Women for 2021’ series. But from the moment we sat down for our exclusive chat, I could tell that there was also so much more to this dynamic woman, who credits much of her success to her supportive and close-knit Greek Australian family.

‘They wanted us to always be independent’:

Professor Skyllas-Kazacos was born on the Greek island of Kalymnos in 1951, but she, along with her parents George and Kaliopi Skyllas and younger sister Tina, emigrated to Australia in 1954 in search of a better life and opportunities.

Once there, Professor Skyllas-Kazacos, her sister and her two brothers, Michael and John, who were born in Australia, were encouraged by their parents to continue their education as a means of maintaining their independence.

“As a young Greek girl growing up, I was very fortunate to have parents who really valued education, especially for their daughters. They wanted us to always be independent and not dependent on a man to rule our lives. So they really pushed us and nurtured us, which was very unique in those days,” Professor Skyllas-Kazacos tells The Greek Herald.

It was this nurturing and independence which then gave Professor Skyllas-Kazacos the freedom to become a professor in chemical engineering, even though she didn’t know that’s what she wanted to do when she was younger.

“I had initially put Law down as my first preference for my university entry applications,” the Professor says.

“But one day before the final deadline for making changes to your preferences, my father’s business partner and solicitor discouraged me from becoming a lawyer. So I changed my preferences and that’s how I ended up in engineering.”

From that moment on, Professor Skyllas-Kazacos not only graduated with first class honours and the University Medal in industrial chemistry at UNSW, but she went on to complete a PhD in electrochemical studies of molten salts with Professor Barry Welch at the same university.

While still studying for her PhD, she also married the love of her life, Michael Kazacos, and they had three sons, Nicholas, George and Anthony. This newfound family life was something Professor Skyllas-Kazacos thought would impact her career at first, but her expectations changed quickly after a conversation with her PhD supervisor and male mentor, Professor Welch.

“My belief at the time was that once you start a family, a woman can’t really think beyond just having a part-time job. But my PhD supervisor said to me, ‘why should a family stop you from having a career? Just do it.’ It took him to actually tell me I could do it because I didn’t know that I could,” Professor Skyllas-Kazacos says.

And ‘do it’ she did. With the constant support of her Greek Australian family, Professor Skyllas-Kazacos was able to undertake overseas fellowships and sabbaticals at places such as the highly acclaimed Bell Telephone Laboratories in Murray Hill, New Jersey, as well as attend overseas conferences where she could showcase her extensive research in energy storage and aluminium smelting.

Her big breakthrough came in the late 1980’s when her research team invented the vanadium redox battery, which is a rechargeable flow battery that employs solutions of vanadium ions in different oxidation states to store energy. The battery is regarded internationally as one of the most feasible energy storage technologies available to store renewable energy such as wind and solar, reducing fossil fuel consumption and greenhouse gas emissions.

Dozens of companies around the world are now manufacturing and installing megawatt-scale vanadium batteries, the largest one being a 200 MW/800 MWh battery currently being built in China to store energy from a wind farm. Once completed, this will be able to power up to 50,000 houses.

Now, although many might think such a ground-breaking discovery from a female professor in chemical engineering might be overlooked, Professor Skyllas-Kazacos stresses how that wasn’t the case for her. In fact, she believes being female may have actually boosted the coverage her discovery received at the time.

“I was very fortunate to have some amazing people who worked with me… and some very good funding from various government bodies. Without that, we wouldn’t have been able do anything,” Professor Skyllas-Kazacos explains.

“I think maybe the timing was right as well. Being one of the first young women in engineering, it might have helped me to obtain some of my early grants. I think they wanted to support me.

“Also, I always feel that maybe because I was a woman our project received a lot of media attention which in turn, led to early licensing by the Japanese companies Mitsubishi Chemicals and their subsidiary Kashima-Kita Electric Power Corporation in the mid-1990s.”

‘So many different paths to take’:

Almost four decades after Professor Skyllas-Kazacos’ ground-breaking discovery, she is still grateful for the support she received as a female in her field. She is also grateful for the opportunity to work in an area that has allowed her to play a small role in helping to solve one of the world’s greatest challenges – the need to cut our dependence on fossil fuels to reduce the impact of Climate Change.

But during our exclusive chat, it’s clear that over the years, her life has become more balanced and well-rounded. When she’s not sketching, reading and researching her family history (her husband is a Castellorizian), she cherishes the time she spends with her four grandchildren.

“We are currently babysitting our two youngest grandchildren two days a week, which I absolutely love,” Professor Skyllas-Kazacos says with a laugh.

Of course, that doesn’t mean the Professor has stopped her research. Despite having officially “retired,” she volunteers two to three days of her time to continue to work with her chemical engineering PhD students at UNSW, with the hope of inspiring them to become leaders of the scientific field one day.

“My advice [to all young students] is to choose engineering because it is really one of the most versatile courses you can do. Not only do you study science, maths, engineering and computing, you also learn economics and project management and very importantly, problem solving and that’s why engineers are actually very sought after,” Professor Skyllas-Kazacos concludes.

“There are so many different career paths for women and men to take depending on their preferences. You also have the opportunity to solve some of the critical problems facing the world today and really make a difference to the future of the planet. It’s great.”

Wise words from a woman who deserves to be recognised for her trail-blazing work in the field of chemical engineering.