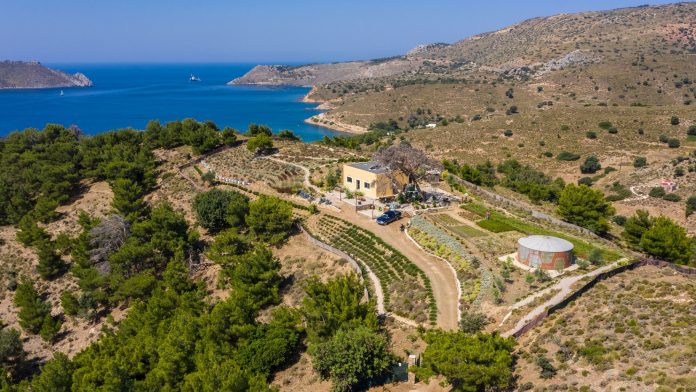 In the southern Aegean Sea lies the Greek island and municipality of Leros.

Surrounded by the crystal blue waters, there exists a small group of workers on a Leros hillside wearing protective gear and smoking beehives.

These are not ordinary beekeepers, in fact, some of them are patients of the Leros psychiatric hospital who are taking part in a 20-year project combining therapy and professional fulfilment.

All of this takes place in the ‘Caserma Estate’ which is home to the social cooperative that is the first of its kind in Greece.

According to project manager and occupational therapist, Andreas Georgiou, the cooperative “aims to socially and professionally integrate persons with psychosocial problems.”

“Through the programme, they acquire self-respect and self-esteem,” he added.

Patients care for the bees and cultivate their high-quality diet – lavender, oregano and other aromatic herbs.

“This is a bee’s paradise,” Georgiou said.

The patients also pack and label the honey and dry the herbs in rooms inside the psychiatric hospital which is later sold in various locations on the island.

For Artemis, a patient in his sixties, he says “I love what I do here, It’s a real relief for the soul.”

Former director of the Leros psychiatric hospital, Giannis Loukas said: “The therapeutic gain for patients is immense,” adding that patients “can also enjoy the rights of employees instead of working illegally, as was the case for a long time in Leros and elsewhere in Greece”.