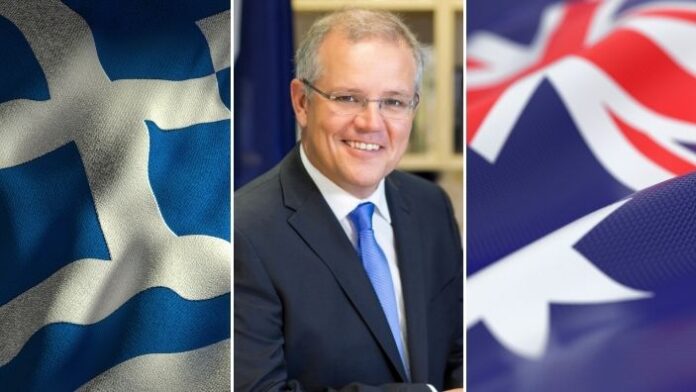 Prime Minister, Scott Morrison, has sent a message of celebration and support to the Greek Australian community on the occasion of the 200th anniversary of the Greek Revolution on March 25.

In his message, Mr Morrison says he will be participating with the Greek community as they celebrate “this new chapter in the epic history of ancient Greece,” and added that “Australia is blessed by the huge presence of the Greek Diaspora.”

“I send warm greetings to all who celebrate the Day of the Greek Independence – the two hundred years since the establishment of the modern Greek state.

On this national day, I participate with you in the celebration of this new chapter in the epic history of ancient Greece.

For millennia, Greece has given so much to the world – philosophy and democracy, science and architecture, arts, sports and culture. A record of achievements that has enriched the world.

Greece is a nation committed to the freedoms of democracy and equality. These are the values ​​and expectations that connect Greece with its friends around the world.

Australia is blessed by the huge presence of the Greek Diaspora. Australians of Greek descent have contributed greatly to our nation, bringing energy and enthusiasm for a new life in a new place.

From our big cities to the provincial cities. From milk bars to high quality restaurants. On the screen next to the newspapers. In conference rooms, courts and parliaments. The men and women of Greek descent who characterise Australia as their country lead the progress of the nation with knowledge and courage.

We share a history and a cultural heritage. We have stood side by side in war and sought the same freedoms and peace. Our ties with blood and family unite us.

Australia is the most successful and interconnected multicultural country in the world. Our multicultural work is a celebration of humanity. It is based on the goodwill, sacrifice and resilience of generations. The Greek Diaspora is a valuable part of this story.

I am happy to participate with the people of Greece and their families around the world as you celebrate this milestone in your nation’s history.