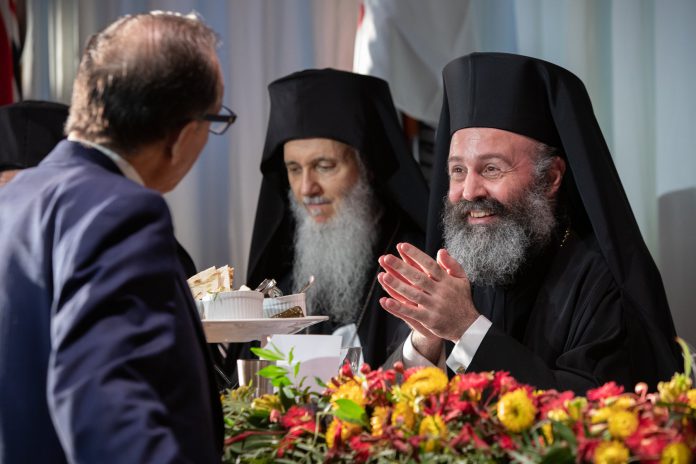 During his speech, His Eminence listed a number of projects the Archdiocese and the Greek Australian community will be involved in for 2020.

The National Metropolitan Choir of Australia has been established, led by the skilled musical composer Mr Themos Mexis to coordinate all events.

The National Metropolitan Choir will be making its first appearance in Constantinople next year, for the occasion of the 30 year anniversary of Patriarch Bartholomew’s leadership, and other events will also take place in the main centres of Australia to honor his thirtieth anniversary as Patriarch.

History of Greeks in Australia publication

Two well-known professors of history, Dr George Frazis and Dr Vasilis Adrahtas will oversee a publication that will be written on the history of Greeks in Australia and the Archdiocese, and which will be published in English and in Greek.

As of this year, the Archdiocese is organizing state-based Youth Conferences in Melbounre on January 25th, in Perth on February 8th, in Brisbane on February 15th, in Sydney on February 29th, in Northcote on March 14th and in Adelaide on April 11th.

“I want to give youth the opportunity to speak to me. I want to hear the youth,” said His Eminence.

Bribe Island will be the home of the National Youth Retreat Centre, renovations will take place and the area will be set up with 180 beds for Christian Greek Orthodox youth to come together to learn about Christ and meet each other.

His Eminence credits President of the Committee for the Retreat at Bribe Island, Mr Emmanuel Kallinikos and his co-workers.

His Eminence reached out to the Greek community for their financial support in building this centre, and reminded the crowd that proceeds from his name day celebration would go toward this cause.

The Archdiocese previously announced that their focus would be on combatting drug dependency in Sydney and Melbourne.

His Eminence acknowledged Mr Nikolas Andronicus to offered his property in Melbourne as well as one million dollars to go toward establishing an ELPIS centre in Melbourne.

“I warmly thank Mr Nicholas Andrianakos for his gift and express my paternal love and gratitude for his generosity. I bow before his sensitivity and his philotimo. A chapel will be built to honour him and it will be dedicated to St Nicholas, and the official name of the center will be ‘Nicholas Andrianakos Centre’,” said His Eminence.

In Sydney, Father Angelos Aliferakis has undertaken the responsibility of managing the drug centre in Sydney. The institution is named ELPIS and already has an ABN number and a written constitution.

St Andrew’s Theological College and renovations of the Archdiocese

St Basil’s has donated land in Lakemba to house students of St Andrew’s Theological College during their years of study.

“This undertaking will cost over ten million dollars and will give a new direction to Orthodox Theological education here in Australia,” said His Eminence.

He thanks the president of St Basil’s Committee, Mr James Jordan, the CEO Father Nicholas Stavropoulos and all its committee members.

“When the Theological College moves to its own space then we hope to be able to renovate the building of the Archdiocese so that it can be worthy of the hopes we have as well as the needs of a strong local Church made of so many people,” said His Eminence.

The plans for the renovations of the Archdiocese building are expected to be compete in 2024.

School of Byzantine Music of the Archdiocese

The School of Byzantine Music of the Archdiocese, which was established in September 2019, will aim to work closely with the Theological school.

Three gifted chanters from Melbourne, Mr Vaios Anastasopoulos, Vasileos Kougioumitzis and Lambros Blahaniotis under the direction of their Archbishop, have formed the steering Committee for the founding of this School. The General Director is Vaios Anastasopoulos. Director of the subcommittee in Sydney is Vasileos Psillakos; director in Adelaide is Mr Nikolas Zisopoulos, while shortly other persons will be assigned in the Archdiocesan districts of Perth, Brisbane and Melbourne.

His Eminence also outlined the focus of establishing English speaking parishes across Australia.

This has already begun in Perth with the founding of the parish of the Pantocrator, under the care of Fr Emmanuel Stamatiou.

In Sydney, the founding of the parish of St Marina, Rouse Hill, was dedicated to Mrs Marina Constantine and her children who donated a property worth nine million dollars to the Archdiocese. They will also be building the church at their own expense, in addition.

A potential monastery outside of Melbourne

400 hectares of land, outside of Melbourne, was gifted to the Archdiocese by Mr Onofrios Gorozidis, which will be named Mount Melas.

Upon approval from local authorities, the submitted plans will see a monastery for monks in honour of Panaghia.

The Castellorezian Brotherhood also gifted the Archdiocese and St Basil’s a nursing home valued at 15 million dollars. St Basil’s has undertaken the management of the facility.