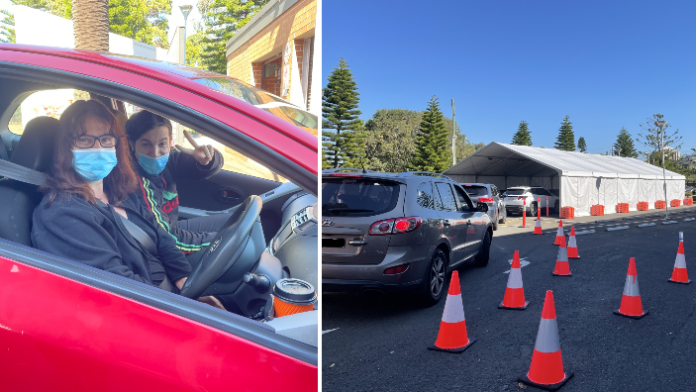 Once the gates of Belmore Sports Ground opened at 9am on Friday, September 17, a steady stream of cars passed through as hundreds of people arrived to receive their Pfizer or AstraZeneca vaccines at Sydney’s first drive through vaccination clinic.

The clinic is in the heart of one of Sydney’s 12 hotspot Local Government Areas (LGA) and is at the spiritual home of the Canterbury-Bankstown Bulldogs. It will be running every Friday, Saturday and Sunday for the next six weeks.

On the first day of the clinic, cars filled with families and couples travelled in one direction towards a tent where they had an ‘encounter’ with a registered nurse who checked their vaccination appointment. Each person in the car was then administered the appropriate vaccine before they drove to an observation area where they were monitored for 15 minutes.

Dr Jamal Rifi, who runs the clinic, told The Greek Herald that anyone who was anxious about having the vaccine would also receive a special consultation.

“Someone who is anxious or someone who wants a longer consultation, we have another bay where they will come in and I will talk to them and address their concern,” Dr Rifi said.

“If they’re happy to proceed, we do have Pfizer, we do have AstraZeneca, so we will give them the injection depending on whatever they need.”

From what The Greek Herald could see on the opening day of the drive through vaccination clinic at Belmore Sports Ground, everyone who was waiting in the car queue had smiles on their faces and were excited to be there.

Mary and Nicholas, a Greek mother and son from Lakemba, were one of the hundreds waiting in the line. Mary said while she was nervous to be vaccinated, she was also ‘relieved I can finally get it over and done with.’

“My son convinced me [to come down]. I kept putting it off and I thought, ‘I’m going to wait until the end of the line…’ and then we heard about this and he said to me, ‘mum they’re going to be doing a drive through’ and I said, ‘why not?’,” Mary told The Greek Herald.

“I think it’s a great idea. You don’t actually have to get out of the car, you don’t have to stand and wait for hours on end, so this is perfect.”

Mr Sweetman, another clinic visitor who gave a thumbs up after receiving his vaccine from Dr Rifi, said he also thought it was a ‘fantastic’ idea because ‘I waited only five minutes.’

‘Gives people a bit of hope’:

Of course, a successful drive through clinic such as this takes time to organise and the Shadow Minister for Industrial Relations and for the Arts, Tony Burke MP, told The Greek Herald it had been in the works for a couple of weeks but once everything aligned, things ‘moved really quickly.’

“There’s been a really deep frustration throughout the local area and to have something like this gives people a bit of hope when they need it,” Mr Burke, who is also the Member for Watson and Patron of the Bulldogs, said.

“I’ve just walked past the queue and it’s the happiest queue in Belmore. You’ve got family groups in cars together. It just means they can all come down and [get vaccinated] together.”

Member for Canterbury, Sophie Cotsis, agreed with Mr Burke and encouraged anyone who wants to get vaccinated to visit the drive through.

“I think once people hear about it and they see they can just make a booking and drive through… they’ll tell their neighbours, their family, their friends and that’s critical,” Ms Cotsis said.

“The way out of this is vaccination and increasing our rates, particularly in our community where there are hotspots. So it’s vitally important that as many people who haven’t yet been vaccinated bring their family, hop in the car and drive through.”

If you want to book an appointment at the Belmore Sports Ground, you can make one at https://bit.ly/39hANLx.