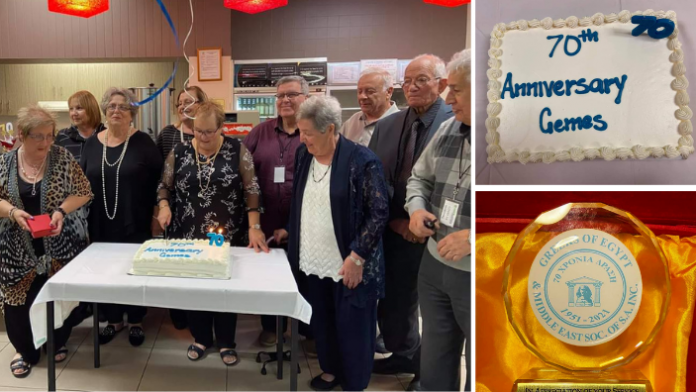 With a special event held at the Club’s premises in Keswick, Adelaide last Sunday, members and friends of the Greeks of Egypt and Middle East Society of SA (GEMES) celebrated the 70th Anniversary from the founding of the Society.

In her opening speech, President Renata Irene Papaioannou welcomed the attendees and acknowledged the Society’s founding members for their wisdom and forward thinking.

“On this special day, would you allow me to firstly pay my respect and gratitude to the founding members of our Society for giving us the chance to be part of and serve in one of the finest and most traditional institutions in existence that being no other than our Society, The Greeks of Egypt and Middle East Society of South Australia Inc, a Society build with sweat, blood and tears, and I congratulate all past and present committees, members, sponsors and donors that have helped to create, and establish the prided and tradition, that we have before us today.

“From the humble beginning, our Society has grown to an organisation known in the South Australian Greek Community not only for our social activities, but also for our historical artistic, sporting and charitable work,” said Ms Papaioannou.

“Let’s aim to be present for the 80th anniversary of the club,” Ms Papaionannou said and expressed her gratitude to the Executive Committee and the volunteers.