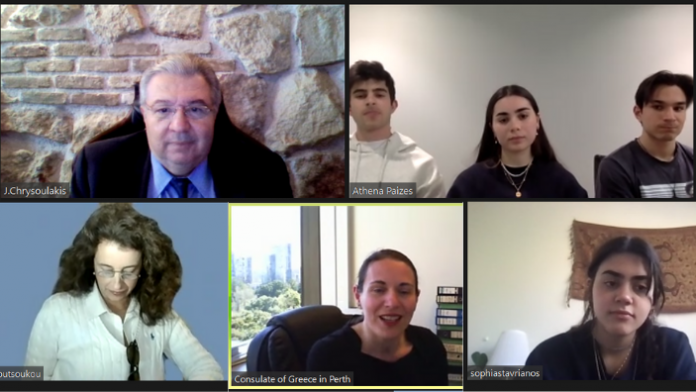 Greece’s General Secretary for Greeks Abroad and Public Diplomacy, Professor John Chrysoulakis, has held his first meeting with diaspora in Australia as part of his goal to create a communication network of young expatriates around the world.

The meeting was held with the executive committee of the Greek Students Association of the University of Western Australia and the Consul of Greece in Perth, Georgia Karasiotou.

READ MORE: Five students band together to form the only active Greek youth group in WA.

During the meeting, Mr Chrysoulakis informed the young Greeks about the initiatives of the General Secretariat of Hellenes Abroad, both for the dissemination of the Greek language and for the new, English-language programs of Greek universities.

Regarding the English-language programs of Greek universities, Mr Chrysoulakis stressed that the main goal is to attract third or fourth generation Greeks who may not speak the language sufficiently and who, until recently, did not have the opportunity to study in their place of origin.

Mr Chrysoulakis concluded and said the goal of the Greek government is to strengthen the role of the Greek diaspora in the country and announced hosting programs for the summer of 2022, which will enable young Greeks to visit their country of origin and get to know each other.

For their part, the Greek students from Perth said they were excited and willing to contribute with all their might to this effort.

READ MORE: Georgia Karasiotou: ‘No matter how far we are, Greece is always in our hearts’.

Cretan Association of the Northern Territory re-established after five years