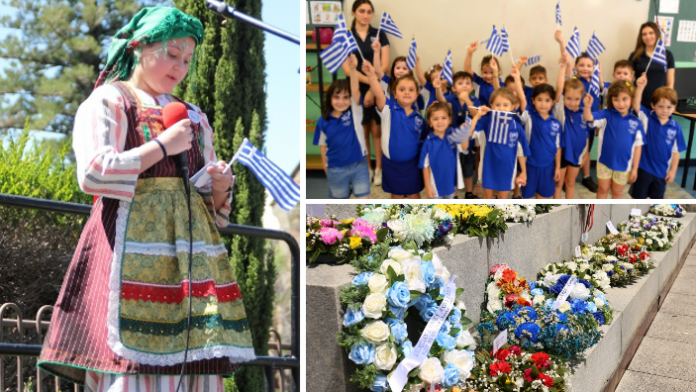 The 81st anniversary of OXI Day was commemorated over the weekend with a number of wreath laying ceremonies and heartfelt speeches by Greek communities across Australia.

Here’s how the commemorations went down throughout the country:

A number of Greek Orthodox churches in the state also conducted doxologies and memorial services to remember all those Greek soldiers who lost their lives fighting bravely for Greece.

At Saints Raphael, Nicholas and Irene Greek Orthodox Church in Liverpool, students from the Greek school wore traditional Greek costumes and proudly held the Greek flag inside church during a service. Later, wreaths were laid at a cenotaph outside of the church, while the students recited poems.

Elsewhere, students from All Saints Grammar School in Belmore also laid wreaths during a doxology on Sunday, while the Greek school of St Nectarios Greek Orthodox Church in Burwood held a virtual celebration of OXI Day. Videos of young children reciting poems and songs were posted on the church’s social media pages.

In Victoria, the Hellenic RSL Melbourne held a small memorial service to remember the sacrifice of all those who fought for Greece during WWII.

The service began with a Divine Liturgy at St Eustathios Greek Orthodox church in South Melbourne and was followed by a wreath-laying ceremony at the Australian Hellenic Memorial.

Wreaths were laid on the day by a number of prominent members of Melbourne’s Greek community including, but not limited to, the Consul General for Greece in Melbourne, Emmanuel Kakavelakis, and the President of the Greek Orthodox Community of Melbourne and Victoria (GCM), Bill Papastergiadis.

During the day, students from all of the GCM’s Greek schools also held an online assembly. Poems were recited, while two students and their father played their bouzouki, baglama and guitar and sang the satirical anti-war song “Aκου Ντούτσε μου τα νέα” composed by Panteli Tounta in 1940. At the closing of the assembly, students watched the short film “Ειρήνη” of Aristophanes.

On Sunday, October 31, the Greek Orthodox Community of SA (GOCSA) commemorated the 81st Anniversary of ‘OXI Day’ with a doxology held at the Cathedral of Archangels Michael and Gabriel followed by a wreath laying ceremony and the reciting of poems by students of the Community’s Greek Language school students.

During the event, the President of GOCSA, Bill Gonis, gave a small speech and acknowledged the Greeks who “fought for their freedom, values and principles.”

“The Greek Orthodox Community of South Australia educates the next generation about the heroism of Greek men and women who fought for our freedom and continues to instil in them the brave legacy left to us by our predecessors,” Mr Gonis said.

“May these sacrifices made by our ancestors become a beacon of unity and ideals towards democracy and peace.”

The Consulate of Greece in Perth organised a Wreath Laying Ceremony at Kings Park State War Memorial on Sunday, October 31, to commemorate the National Day of 28 October 1940.

The wreath laying was preceded by a doxology at the Church of St Nektarios. The ceremony opened with a blessing by the Reverend Fathers, presided by His Grace Bishop Elpidios Kyaneon.

This was followed by performances from the students of St Andrew’s Grammar and the Immaculate Heart College.

Later, Australian and Greek dignitaries paid tribute by laying wreaths and the ceremony was concluded with short speeches by the Consul of Greece in Perth, Ms Georgia Karasiotou and Mr Hugh Jones MLA, Representing the Premier of WA.

About 100 people attended the commemorations, which began with a church service and doxology followed by a trisagio and wreath laying ceremony at the Hellenic War Memorial in Canberra.

In attendance were a number of Greek community members including His Excellency of Greece, Mr George Papacostas; Deputy Head of the Mission for Greece, Mr Theo Michalopoulos; High Commissioner of Cyprus, Mrs Martha Mavrommatis; President of the Greek Orthodox Church and Community of Canberra, Mr John Loukadellis; and the President of the Cyprus Community of Canberra, Mrs Georgia Alexandrou, among many others.

“The Greeks of Australia should be congratulated for acknowledging their traditions, customs, culture, history and language and for passing them onto this current generation and for future generations ahead,” Mr Papacostas said during his speech.

Later, students and teachers from the Greek School of Canberra recited traditional poems and songs to commemorate the significance of OXI Day.

“For me, OXI means freedom. Greece is a small country, but a brave country that will never give up it’s freedom, faith, culture and its language. I am very proud to be standing here today and witnessing our kids from the Greek school carry on our traditions,” Principal of the School, Mr Loukadellis, said.

The Greek Orthodox Community of Northern Australia (GOCNA) marked OXI Day over two days in Darwin. On Saturday, October 30, students from the Greek Orthodox School of Darwin held an assembly where they performed a number of Greek plays and recited traditional Greek poems.

On Sunday, the local community gathered at St Nicholas Greek Orthodox Church in Darwin for a doxology and memorial service.

Media reports later emerged of “concerning behaviour” inside the church as anti-vaxxers approached NT Opposition Leader, Lia Finocchiaro, who was in attendance at the event, and expressed their disappointment at the state’s vaccine mandate.

Later, a wreath laying ceremony was held with a number of representatives from the Greek community organisations and broader community. This included Ms Finocchiaro, the Lord Mayor of Darwin, Kon Vatskalis, the Honorary Consul General of Greece in Darwin, John Anictomatis, Alderwoman Sylvia Klonaris, and the President of GOCNA, Nicholas Poniris, among many others.

The commemorations began with a doxology service, followed by a wreath laying ceremony inside the church and souvlakia outside.

During the ceremony, the church chanters and the congregation also sang the Greek national anthem as a way of honouring the Greek men, women and children who fought heroically during WWII.