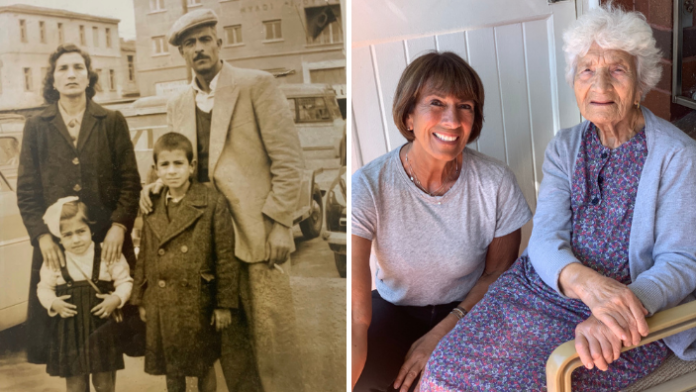 For some a milestone. For her, just the natural flow of time.

I ask her how she feels that she’s now officially a centenarian.

“I feel like a girl,” she says smiling, and although her hearing has naturally deteriorated, she sounds in good spirits.

Mrs Boulas immigrated to Australia from the Greek island of Samos, in 1953, with her husband Aristarchus and her two kids, John and Koula.

Today, almost seven decades later, with her daughter’s assistance, she retells her life story from her house in Mascot, where she’s lived for a little less than seven decades.

‘We came to Australia for a better life’:

“We were on the ship and we were starving. John and I were crying from hunger,” Maria’s daughter says, as she recalls the journey to the new homeland, “there was a man who was selling biscuits from the bakery but dad didn’t have any money and he offered him his wedding ring. The man ended up giving us the biscuits for free”.

“We came for a better life. My husband wanted our kids to study and in Samos they couldn’t, due to his political views,” Maria Boulas tells The Greek Herald.

Aristarchus, Maria’s late husband, had the opportunity to emigrate to the country under the ten pound assisted passage scheme funded by the British and Australian governments. The program was aiming to attract more British to the country, because they were seen to be culturally close to Australians.

However, a great number of migrants from other cultural backgrounds also emigrated during this period.

Like other Greek migrants, settling into a new country was not easy for the Boulas family who came to Australia with nothing but a bag each.

“I was running and running from one job to the other. My husband and I were working very hard,” says Mrs Boulas.

The kids often had to go to school very early in the morning and wait for it to open or they would be at home alone with John looking after his little sister Koula.

But for a good reason.

Five years after they arrived, the family had enough savings to purchase land and build the family home in Mascot and about a decade later, John became a doctor and Koula got a teacher’s scholarship.

“I had a good life but my youth is now gone forever,” Mrs Boulas says selflessly, expressing her pride for her two children who studied and created their own families and successful careers.

‘Greek immigrants have made Australia a better place’:

Maria’s contribution to her local community and to Australia were recently recognised by NSW Labor politician, member for Heffron, Ron Hoenig.

“Like so many other Greeks, Maria and her family are a great Aussie success story – they came to this country with nothing but the clothes on their back and a will to work hard. They succeeded and made a new life for themselves and their children”.

“There are countless stories of families like Maria Boulas’s, about Greek immigrants who came to this country for a better life and who have made Australia a better, more prosperous place to live,” Mr Hoenig concludes.