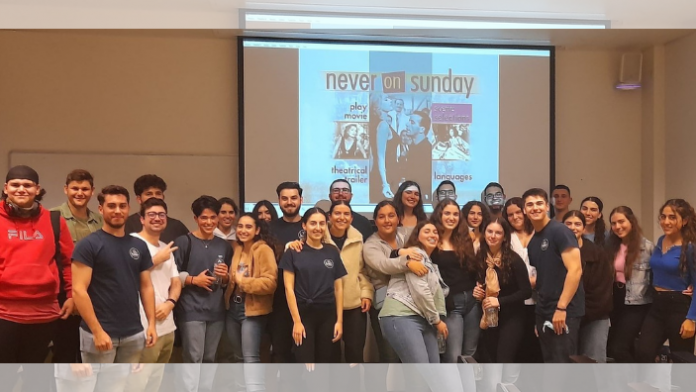 Greek Australian university and high school students in Sydney learnt about what Greece was like in the 1950s-1960s through the narrative of cinema, thanks to a screening of the film ‘Never on Sunday’ organised by the UTS Hellenic Society on Friday, April 15.

The projection of Jules Dassin’s classic film, starring Melina Mercouri, was organised for purely educational purposes in a lecture theatre of the University of Technology Sydney (UTS) with free entry.

Most of the Greek Australian students saw this film for the first time and, as they said, they liked the fact they saw images of Greece from another era and the behaviours of its people.

The President of UTS Hellenic, Dimitri Kallos, prior to the screening, thanked everyone for their attendance.

“The Greek cinema is a frame of reference for our civilisation and we, as students of Greek origin living abroad, can benefit greatly from watching films of the old and modern cinema of Greece,” Mr Kallos said and added that, as part of the initiatives of UTS Hellenic, they will show another Greek film whilst also organising other cultural events.

Among the attendees was a group of students from the Macquarie University Greek Association headed by President, Zoë Re, and a class of Year 12 students studying Modern Greek for the HSC at the Saturday School of Community Languages (Ashfield Centre).