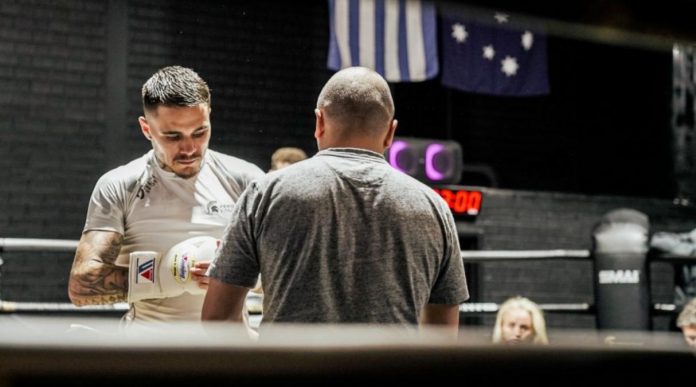 The award was presented by the Vice President of the Australian National Boxing Federation, Charlie Lucas.

“Every year, the discussion goes on for quite a while when deciding the fighter of the year because there’s a lot of good fighters in Australia,” the Vice President said.

“However, this year, there was only one name that came up – George Kambosos.”

When accepting his award, Kambosos thanked the Federation before reassuring “I’m sure in 2022, I will win the award again because I’ve got that focus.”

“I’ve got the hunger, I can’t be stopped, I won’t be stopped. Thank you for the award. It’s a great honour and I’m looking forward to June 5 and creating more history,” he added.

In less than two months’ time, the Greek Australian boxer will be fighting American, Devin Haney, at Melbourne’s Marvel Stadium in front of 50,000 live spectators.

The undefeated Kambosos will defend his WBA, WBC, WBO and IBF belts in what he has dubbed “the biggest fight ever in Australian history.”

For WBC lightweight title-holder, Devin Haney, who is also undefeated, the mega-fight presents an unprecedented opportunity at being crowned the first-ever Undisputed Unified World Lightweight Champion.

“June 5th is not only for myself but for my country – Australia and Greece, we will continue to shine on the world stage and be victorious,” he added.

“I’ve got all these beautiful belts but that’s not what it’s about. It’s about my legacy, and for the love of the sport and the love of fighting.”

In an exclusive interview with The Greek Herald, Kambosos revealed that legacy runs through all that he does, including the opening of his own boxing gym.

“Eventually we will open up where we can train some young kids and help them. You know, troubled kids, kids that are on the street. That’s what it’s about,” he said.

“I’m in a position where I can help change lives. I can help inspire the youth.”

WATCH George Kambosos explain to The Greek Herald his vision for Ferocious Boxing.

The Spartan and “Emperor,” concluded with a message to his Greek and Australian supporters.

“I love my Greek support, my Greek fans and my Australian support as well. I do this for you guys, I’m prepared to die for you guys and I know you guys have my back.

“You support me to the end and June 5th, we show the world again who we are,” he said.

Tickets for the mega-fight at Marvel Stadium in Melbourne are now on sale at Ticketek.