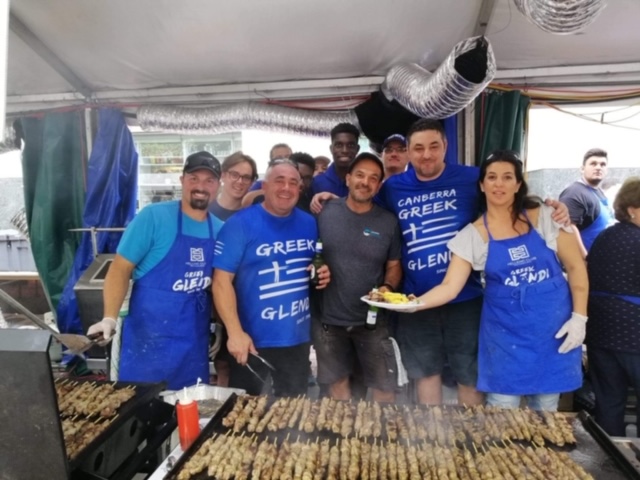 The annual Canberra Greek Glendi was held on the weekend of the 22nd and 23rd of February, taking place at Garema Place in the city central of Canberra.

The event was a successful weekend thriving of Greek culture, food, music and endless dancing with an estimated turnout of 150,000-200,000 people visiting the Multicultural Festival.

As Canberra’s second biggest tourist event, and Australia’s largest Multicultural event, the festival had support of many people from a variety of cultures and backgrounds, including Croatians, Asians, Russians and interstate people visiting the Glendi.

Canberra’s Premiere Greek street party, as Father Petros expressed, “every year gets bigger and better”, with a massive show of support from many Greeks and people across the country.

With events running all weekend, the Hellenic Youth Club – HYC took over on Saturday, dancing the night away at the Bouzouki night. The following day, performances continued from the Canberra Hellenic Dancers from 12-4, as well as plate smashing, Zorba dancing and Loukoumades eating competitions.

There were additionally special performances by our Canberra’s own local talent Stratos Gianakakis on Bouzouki, Theodore Merkoureas on the Daouli, accompanied by a Didgeridoo player.

As everyone knows, Greeks no doubt have the best food, with the Glendi showcasing some of Greece’s specialties including souvlakia, gyros, kalamaria, koulourakia, spanakopita and loukoumades.

John Loukadellis, president of the Canberra Greek Community, was present at the festival and revealed how you can spot a non-Greek from their mispronunciation of Greek words when they ordered food, e.g. Spanakopita.

After being elected on the 10th of November 2019, John Loukadellis had a vision to expand Canberra’s Greek community by enforcing and encouraging his 3 mantras; “faith, “culture and tradition” and “Greek Language”.

Ever since, Loukadellis been working towards this goal, remaining a firm believer in the benefits of having a Greek speaking community from a young age and “setting the foundations straight through church, culture, traditions and our learning of the language”, and is something he will continue to push.

He discussed his plans for the Greek school program and how a year long project only took 3 months to achieve with a lot of hard work, persistence and belief, leading to increased memberships. Last year, there were 37 kids enrolled and are currently sitting on 93 kids, still enrolling up until the March 20.

Two of the biggest Greek school changes include moving locations to the Hellenic Club in Woden and introducing a new syllabus – the Papaloizou Publications system, replacing the Margarita system, which allows both Greek speaking and non-Greek speaking parents to assist children with their Greek work.

This has created a more modern, innovative and resourceful program which is currently being used in 4 Sydney, schools, including Saint Nectarios in Burwood.

Mr Loukadellis has also organised to send 12 kids to Sydney next weekend for a youth Conference for young Greek Australians. The president has also been invited to MC at next year’s conference and will continue to encourage Greek dancing, the Greek school program and the Greek Youth of Canberra.

The Canberra Greek Glendi weekend was full of perfect weather, a massive turnout of people, and endless amounts of food, embracing what Australia is best known for, Multiculturalism, right in the Capital.

Bring on 25 years of the Multicultural festival Canberra next year!