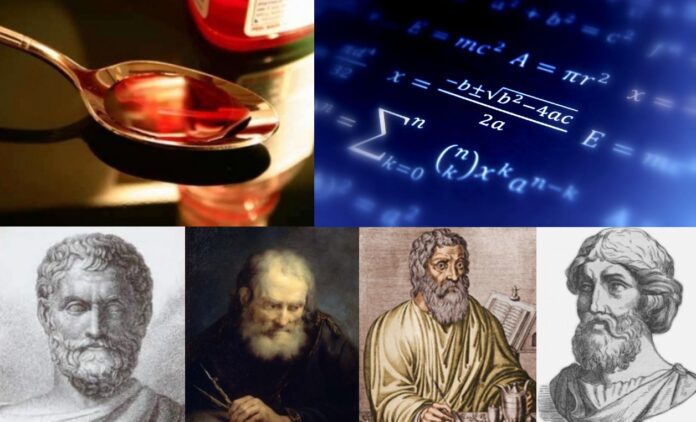 Hippocrates (460 – 370 BC) was a Greek doctor who studied the human body and discovered that there were scientific reasons for ailments. Hippocrates’ breakthrough in medicine include developing the theory of the four fluids, or ‘the four humours’, giving the first description of clubbed fingers, thoracic empyema, a cure for haemorrhoids, the principle of endoscopy, documented epilepsy, used the rectal speculum as a diagnostic tool to detect ailments, first understood the importance of a good diet, and pointed out the symptoms of pneumonia. Hippocrates was the first to recognise that disease occurred naturally and was not due to supernatural influences. Hippocrates teachings and practices, including the Hippocratic oath detailed in the Hippocratic Corpus, remains relevant today.

Pythagoras of Samos (569 – 470 BC) is well-known for inventing numerology and the Pythagorean theorem. Pythagoras began his theory of numbers by discovering the numerical relationship between numbers and musical notes. Pythagoras identified the physics of intervals, or distance between notes, that form the primary harmonic system which is still used today. Particularly, Pythagoras discovered the foundations of musical tuning known as Pythagorean tuning.

Aristarchus of Samos (310 – 230 BC) first proposed the astronomical ‘heliocentrism’ model in 200 BC to suggest that the Earth revolves around the Sun. Aristarchus’s model placed the Sun at the center of the solar system with everything else, including the Earth and other plants, revolving around it. Nicolaus Copernicus, a 16th century mathematician who later went on to prove Aristarchus’s hypothesis, is often credited with the discovery. Heliocentric theory became the foundation of all modern astronomy and advanced the understanding of gravity and inertia.

Archimedes of Syracuse (287 – 212 BC), an engineer, physicist, inventor, astronomer and mathematician, invented what is commonly known today as the Archimedes screw around 250 BC. The Archimedes screw is a machine used for transferring water into irrigation ditches. The screw is widely used by agriculturalists to raise irrigation water and for land draining. In addition, Archimedes is credited for his “Eureka!” moment in which he discovered the ‘Archimedes principle’ of buoyancy, designing the Iron Claw war machine, theorising the concept of an odometer, and developing the pulley system.

Thales of Miletus (624 – 546 BC) has been credited with the discovery of five geometric theorems: that a circle is bisected by its diameter; that angles in a triangle opposite two sides of equal length are equal; that opposite angles formed by intersecting straight lines are equal; that the angle inscribed inside a semicircle is a right angle; and that a triangle is determined if its base and the two angles at the base are given. Today, Thales is most commonly remembered for his hypothesis that water is the original principle of both nature and matter.