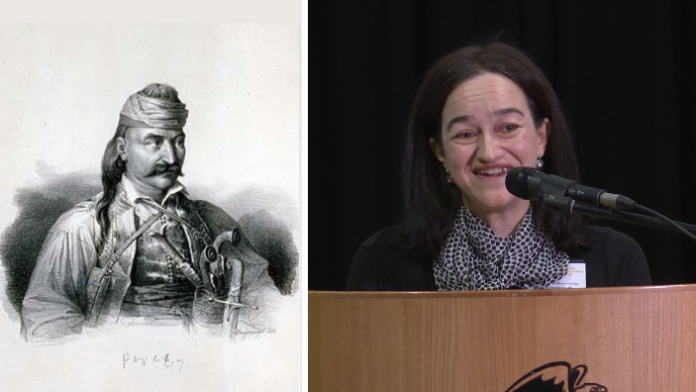 Dr Stavroula Nikoloudis, lecturer and coordinator of Greek Studies at La Trobe University will present the online lecture In memory of Theodoros Kolokotronis (1770 – 1843), on Thursday, August 19 at 7.00pm, as part of the Greek History and Culture Seminars, offered by the Greek Community of Melbourne.

During the Greek Revolution of 1821, several individuals rose to prominence as key, charismatic leaders. Theodoros Kolokotronis was one of them.

Born in the Peloponnese, Kolokotronis came from a family of klephts – bandits, whose struggles for autonomy gradually gained momentum and contributed to the war of independence against the Ottoman occupiers of their homeland.

Kolokotronis’ strategic genius served the overall uprising well, leading to a number of decisive victories, including the battle of Dervenakia (1822). The internal factional conflicts of the Greek revolutionaries (1823-1825) and the loss of many lives, including that of his son (1824), took their toll, but his vision continued to fuel his endeavours. It is in part his perseverance that makes him such a relatable protagonist. His inspirational leadership endeared him to his followers and provoked the ire of his enemies.

This lecture concentrates on Kolokotronis’ Memoirs (dictated to Tertsetis in 1836) as a means of exploring the intriguing story of this central authority figure, his contribution to the struggle for independence and his enduring relevance.

Her area of specialisation is Mycenaean studies, Mycenaean being the earliest attested form of the Greek language. Her teaching centres around ancient and modern Greek language and literature. Her research deals with questions relating to ethnic identity and cultural diversity, migration, diaspora communities, diachronic language development and language education.

Where: This is an online lecture and can be followed on Zoom and Facebook.