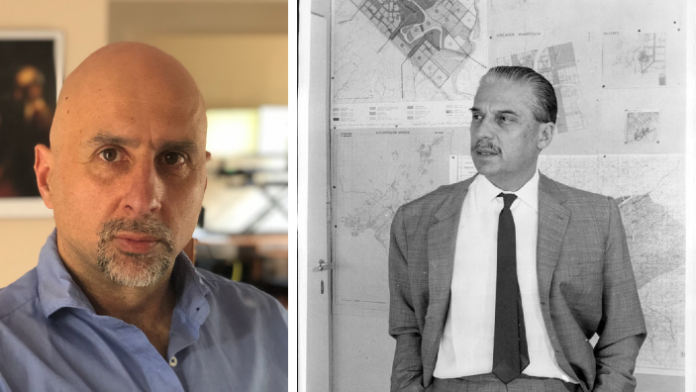 Dr Aris Gounaris will give an online-only lecture entitled Constantinos A. Doxiadis: An urban planner of global fame, on Thursday 26 August, at 7.00pm, as part of the Greek History and Culture Seminars, offered by the Greek Community of Melbourne.

Constantinos A. Doxiadis (1913-1975) was an architect/master planner educated in Greece and Germany who became one of the world’s most influential and sought-after urban planning and development consultants in the late-1950s and 1960s.

This seminar will explore the critical stages of Doxiadis’ life, including his wartime resistance and espionage activities, and his efforts to rebuild Greece after the withdrawal of the Axis powers in 1944.

The seminar will also reflect on Doxiadis’ innovative approach to urban planning, or the ‘science of human settlements’, as he called it and examine how his theories informed the master plan for a new capital city, a long way from Athens.

How did Doxiadis rise from obscurity to a prominent position in the Greek bureaucracy? How did he establish credibility with foreign power brokers, who authorised and funded his post-war reconstruction plans? How would Doxiadis help Greece get back on its feet after a brutal occupation? What did Doxiadis do in Australia prior to the most productive and successful phase of his career? And which capital city is Doxiadis most closely associated with?

To answer these questions, Dr Gounaris will bring together his knowledge of modern Europe, his passion for the history of cities and curiosity about the people that shaped them, and share some interesting stories along the way.

Aris Gounaris has a PhD in philosophy and history from La Trobe University, an Executive Master of Public Administration degree from Melbourne University and a Graduate Diploma in Economics from Monash University. His thesis, Self-determination and Secession: A Remedial Rights Approach, examines the theory and practice of national self-determination with particular emphasis on the separatist conflicts in Kosovo, Chechnya and Aceh. Dr Gounaris has contributed to the ongoing debate about national self-determination through refereed publications, opinion pieces and public seminars. Dr Gounaris has delivered lectures on Nationalism in the Balkans, Greece and Yugoslavia under Nazi Occupation, Imperial Russia and Napoleon as part of La Trobe University’s Modern European History program. He also tutored in history and philosophy. Dr Gounaris is a Victorian public servant. He will present his views in a private capacity.