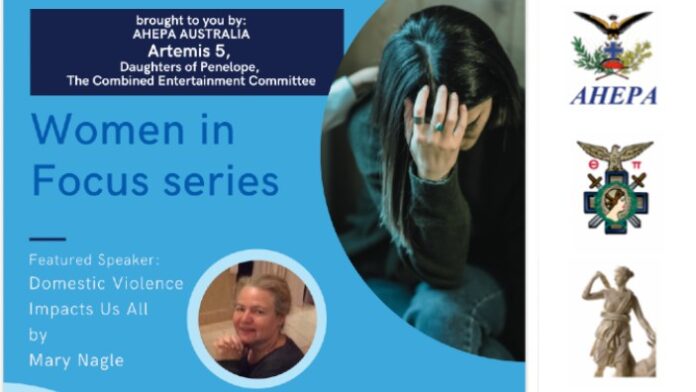 AHEPA Chapter Artemis No 5 Inc. is holding a lecture on Sunday, May 30 at 3pm at the Ashbury Panarcadian Federation Club to discuss the prevalence of domestic violence in Australia, including multicultural communities.

Titled ‘Domestic Violence Affects Us All,’ the lecture will be given by keynote speaker and solicitor, Mary Nagle, who will discuss the early signs that foretell the likely onset of violence in the home, in a relationship, at work or any other situation where there is ongoing interaction among people.

According to data provided by NSW Police, domestic violence claims one life every 15 days. In just one decade, from October 2008 through to September 2018, the number of victims of domestic violence climbed up to 285. The tragic reality of this number is that some of the victims were children.

“It is topical at the moment to talk about relationship violence. There is so much of it in the news, but so much more of it in people’s lives especially from the ethnic communities which we do not usually hear about,” Ms Nagle says.

“AHEPA Australia, led by the President, Committee and members of Artemis 5 is dedicated to raising awareness and addressing issues affecting those men, women, children and their families who suffer in silence. Artemis 5 will continue to raise funds for causes that concern them…”