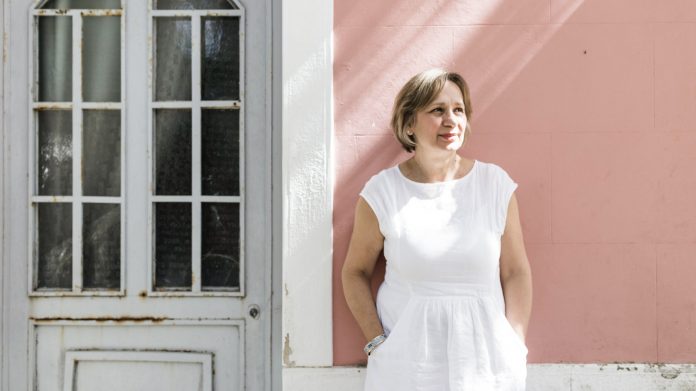 Meni Valle is a Richmond-based food educator and the author of several best-selling Greek Mediterranean cookbooks.

When Valle isn’t running cooking and culinary tours in Greece and in her city, she’s posting her daily meals to her thousands of social media followers.

“It’s just such a rewarding experience and being able to facilitate that for other people who would probably never do it on their own, it’s quite lovely,” Valle tells the Greek Herald.

Her tours are part of an immersion of the cuisine and culinary art of her homeland Greece.

Her now-deceased parents were from Florina in the country’s east and migrated to Melbourne in the late 1950s.

“They met at the train station in Florina… He met mum there and they basically got talking… and he said, ‘I’m going to Australia, would you like to come?’,” Valle says.

Sure enough, Valle’s mother arrived in Australia a year after her father, and they married within months.

“If my daughter came home and said, ‘Mum, I just met a man at the train station and he’s just asked me to come halfway around the world’, I wouldn’t know what to think,” Valle jokes.

She says her parents brought their culinary traditions with them – as did many other Greek migrants – but it wasn’t until shortly before her mother’s untimely passing that she decided to reconnect with these traditions.

“I had never been to Greece, so it wasn’t until my mother got sick that I thought, ‘I really need to go and see where she came from and visit the family and her sisters’.”

She says her auntie Sophia fostered her passion for Greek cooking in the vegetable garden out the back of her little cottage in Florina.

“I [first] got there and she said to me, ‘You’ve come a certain person, but you’re going to leave very different. You’re not going to be the same person as when you came’,” Valle recalls.

“She was very, very right.”

Her experiences here have helped her release five books over the last ten years, including ‘My Greek Kitchen’, ‘Everyday Mediterranean’, and ‘Ikaria’.

The latter collates Valle’s findings of the rugged island through her conversations with locals.

The book features not only recipes but life lessons from the hilly town.

“It’s not just what they’re eating, it’s how they are eating it,” Valle says.

“It’s not the rush that we have of grabbing a sandwich on the run or grabbing a coffee on the way to work.”

“Sitting down with people and enjoying a meal together I think is what contributes as the main feature to the secret of their longevity.”

Ikaria has been identified as one of five ‘blue zones’ in the world.

That is, locals in Ikaria live much longer than people in other areas of the world.

“The common thread is that connection and other people that sort of brings it all together.”

Valle says she holds no qualms about releasing the book during Melbourne’s lockdown one year on since its release.

“What better time to be talking about connections rather than right now?” she says.