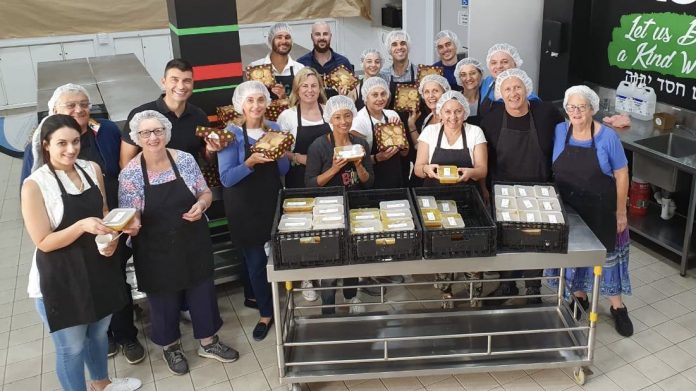 40 community volunteers from the St George Church in Rose Bay will gather at The Big Kitchen in Bondi for St George Hands’ annual Cooking for the Homeless day.

This is Irene Sen’s third year rallying volunteers to help chip in and says she delivers an average of 200 meals to the Greek Welfare Centre (GWC) Soup Kitchen in Newtown every Monday.

“We do about six events in a year,” Sen says.

“I can’t believe these young, 20-to-30 year-olds from the Rose Bay Church. They’re just so supportive and have a really good attitude,” she says.

St George Hands is an initiative that the St George Church in Rose Bay set up to give back to people in need. It helped deliver 180 meals to the Greek Welfare Centre (GWC) Soup Kitchen in Newtown in 2019.

Irene says the number of meals has now jumped to about 250.

“Life is all about ‘take’ and giving back just feels so good for the soul,” she says. “It makes you feel human.”

George Kounaris helps oversee the cooking of the meals and ensures they’re ready to be delivered to around thirty to forty different charities, he says.

“Vinnies, Salvos, women’s and men’s refuges, youth centres, women’s domestic violence shelters” are just some of the different charities that can expect deliveries this year.

That reflects a worrying increase in homelessness he says. He says that since the COVID-19 pandemic, the number of meals needed have almost doubled from 2,500 to 4,000.

“There’s a lot of people unemployed,” he says. “A lot of charities now creating care packs.”

“They’ll put dry goods in bags and put our meals so they get through a week.”