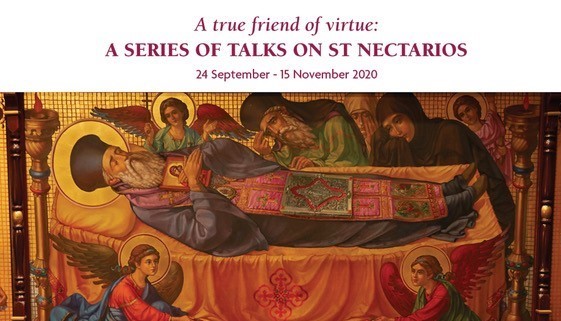 The Greek Orthodox Parish of St Nectarios in Burwood is commemorating the 100th anniversary of the death of much-loved Saint Nectarios with a series of insightful talks held across Sydney.

There will be eight talks in total, four in English and four in Greek, focusing not only on the life of St Nectarios and his legacy in Christianity, but also on some of his previously unpublished writings.

“There are a lot of well-known things that are known about St Nectarios’ life and there are some less known things about his life. We’re going to do a few talks where we try and explore his life in as much detail as we can,” Father George Liangas tells The Greek Herald.

“We’re also going to look at some of his writings. The importance of the legacy of his writings can’t be overestimated… as they firmed the path of the correct Orthodox way of our church.”

The first talk kicks of this Thursday, September 24 at St Ioannis Greek Orthodox Church in Parramatta. Starting at 7pm, Dr John Psarommatis will present a talk in Greek on the life of Saint Nectarios.

From there, there will be a number of other talks held at churches across Sydney, including St Euphemia Church in Bankstown and the Church of the Resurrection of Christ in Kogarah.

This is something Father George says was important as it ensures everyone can get a chance to attend a talk on the important saint.

“Because St Nectarios is so well-loved, holding the talks at different churches gives people in other parts of Sydney the opportunity to participate in them as well,” Father Liangas says.

Due to recent coronavirus restrictions, Father Liangas also stresses that places are limited and by booking only. Bookings may be made at stnectariosburwood.ecwid.com, or call 0427 421 790.

If you are unable to attend, the talks will also be livestreamed on St Nectarios Burwood’s Facebook page.

An overview of the life of Saint Nectarios. In the Church of St Ioannis, 163-165 George St, Parramatta. Speaker: Dr John Psarommatis. In Greek.

Getting to know St Nectarios through his catechetical letters. In the hall of St Euphemia Church,
6-12 East Terrace, Bankstown. Speaker: A/Prof Socrates Dokos. In English.

Getting to know Saint Nectarios in greater depth through eyewitness accounts and his writings. In the Church of Saint Catherine’s, 180 Coward St, Mascot. Speaker: Very Rev Fr. Athanasios Giatsios. In Greek.

Getting to know Christ; according to St Nectarios’ Christology. At the Church of the Resurrection of Christ, 16-18 Belgrave St, Kogarah. Speaker: Lecturer at St Andrew’s Theological College Dr Andrew Mellas. In English.

Getting to know ourselves; according to St Nectarios. In the Church of St Nectarios, 26 Railway Pde, Burwood. Speaker: Chanter Mr Andrew Psarommatis. In English.