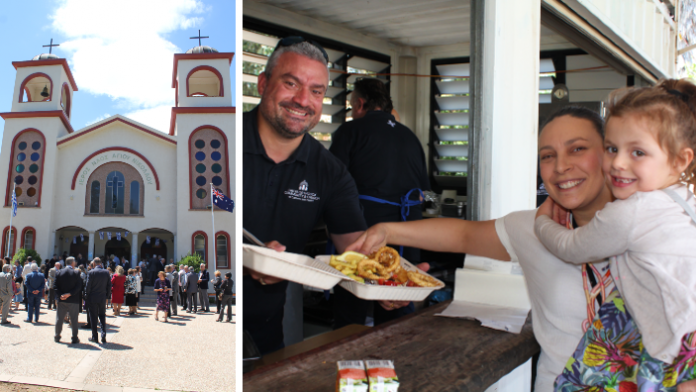 Greek music and food was flowing freely at St Nicholas Greek Orthodox Church in Canberra on Sunday as hundreds of parishioners gathered to celebrate the church’s patron saint.

The day began with a Divine Liturgy presided over by parish priest, Father Petros Kipouros, before people moved outside to a marquee to enjoy a feast organised by the Greek Orthodox Community and Church of Canberra (GOCCC).

Available for purchase on the day was a plate filled to the brim with delicious fish, calamari, salad and chips, as well as a plate of fresh loukoumades.

One person who enjoyed the feast was Michael Daly, an Irishman who has immersed himself in Canberra’s Greek community after marrying his Greek wife.

“Occasions like this are fairly important because for those people who came out from Greece many years ago, it’s an opportunity for them to get together and socialise,” Mr Daly told The Greek Herald on the day.

The President of the GOCCC, John Loukadellis, couldn’t agree more. He, along with Father Petros, gave a small speech on the day thanking everyone for their attendance and providing an update on Greek school enrolments.

Mr Loukadellis also stressed how proud he is to see Greeks and non-Greeks coming together to celebrate the annual St Nicholas paniyiri.

“We’ve noticed that we don’t just serve the Greeks, we serve the broader Canberra community as well. People become aware of the paniyiri and every year, people come down and celebrate with us,” Mr Loukadellis told The Greek Herald.

“So it’s a very busy but a very fulfilling and unifying day for us as Canberra Greeks.”