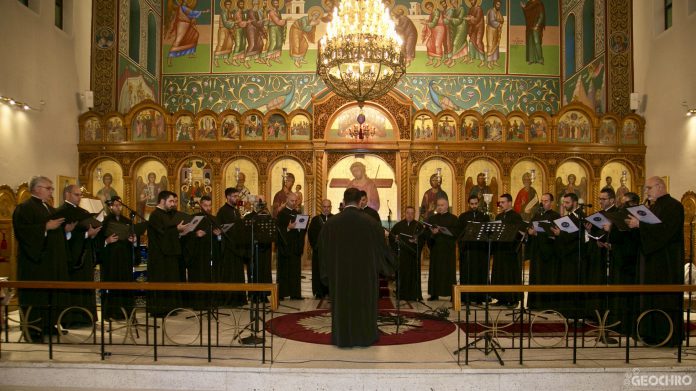 The initiative put forward by the Australian Byzantine Choir was blessed by His Eminence Archbishop Makarios and the Greek Orthodox Archdiocese of Australia.

“It was a very nice evening. The choir was fantastic. They presented us with very nice Byzantium hymns,” said Marrickville’s Parish Priest, Very Rev. Archimandrite Christodoulos Economou to The Greek Herald.

Father Christodoulos noted that, despite the rainy evening, the choir managed to raise $8,500 for the Archdiocese Bushfire Relief Fund. This was all by donation of the attendees, as the event was free.

Marrickville’s Father Christodoulos also commented on how “pleasant” it was to see so many young people involved in Byzantine music and the church, and their willingness to channel these into helping others.

“The nice thing about it, which is very pleasant, is to see a lot of young people are interested,” he said. “99% of people yesterday, were young people chanting…It’s nice to see that the youth has an interest in the choir and in our church.”

The event aligns with Archbishop Makarios’ announcement of an investment into the future continuation of Byzantine Music.

This comes after the Archdiocese’s establishment of The School of Byzantine Music of the Archdiocese in September 2019, which will work closely with St Andrews Theological School in Sydney.