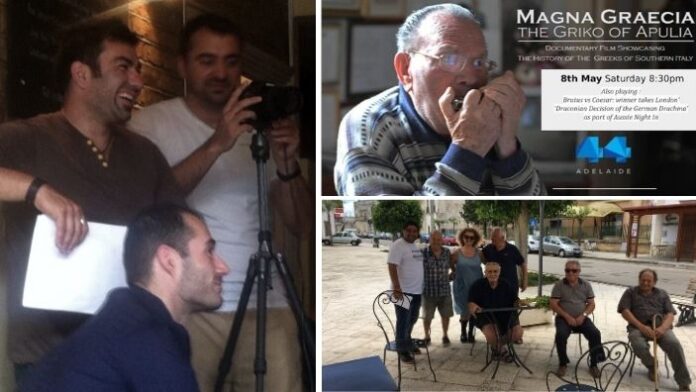 The award winning Magna Graecia: the Griko of Apulia will play on South Australian tv on Saturday, 8 May at 8.30 pm. The film will play with two of our  short satire film projects, and forms a prime time slot for Greek Aussies on “Aussie Night In Channel 44.

Apulia is part of a three part trilogy set in the Southern Italian (Magna Graecia) Greek villages and towns. Author, Billy Cotsis from Sydney and Basil Genimahaliotis, an international architect formerly of London and Adelaide, shot across Calabria and Apulia to bring you the stories of people and regions who are the descendants of Greek people from ancient and Byzantine times.

Cotsis, whose last book was “1453: Constantinople & the Immortal Rulers,” has had relations with the Greko and Griko since his first visit to Italy in 2002. He remains the only Greek Australian to travel across Greek communities in six continents including a visit to Odessa and the Philiki Eteria HQ.

The Apulia film has won an international award for cinematography and is supported by M&J Chickens, helping to ensure the filmmakers were able to produce a quality first of three documentaries set in Magna Graecia.

Some of the music provided is from the great George Ellis. Apulia will play alongside two quirky, short satires:

Draconian Decision of the German Drachma which won an award at the London Greek Film Festival. The premise of the film is, what would happen if Germany had financial problems and Greece was super wealthy. Characters are named after Greek heroes such as Melina Mercouri and Pythagaros. Shot in Sydney and Greece

Brutus vs Caesar: Winner takes London is about two rival gangs in London trying to control the city. Characters based on ancient Roman figures, featuring a cast of Greek, British, Argentina, Jamaica, Australian and Pakistani actors.