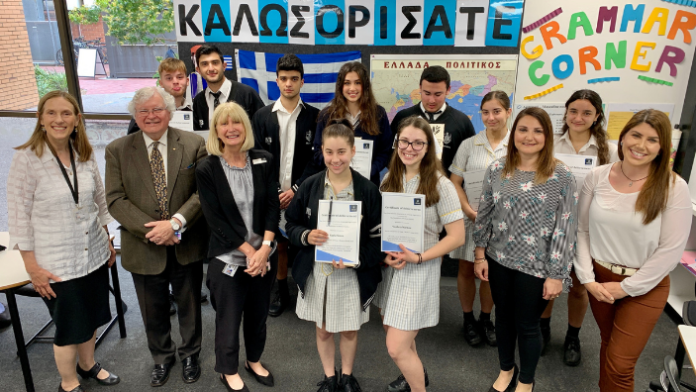 There was no annual dance and big celebrations this year to congratulate the eleven Stage 2 Adelaide High School Modern Greek Class students for their continuous efforts to keep the language and culture alive.

But one of the things Greeks know best is how to be resilient.

In a small ceremony, that took place on Wednesday morning, in room 55 at Adelaide High, South Australia’s only Special Interest Language School, the Greek Parents Association in conjunction with the Foundation for Hellenic Studies acknowledged this year’s students and emphasized on their commitment to stand by the side of the new generation of Greek Australians.

“It is very important not to be a monolingual country,” Chair of The Foundation for Hellenic Studies, Greg Crafter, said.

“There are many Greek success stories in South Australia and we need to continue them,” Mr Crafter told the students.

“Learning the Greek language, is your connection with the past and your legacy for future generations. You have shown grit, philotimo and passion and we are proud of your achievements,” Modern Greek Teacher Dimitra Rozaklis, told the students during the ceremony that concluded with the presentation of certificates and a book by Ms Boundris and Mr Crafter.

Although a small bunch, Adelaide High Greek Class students are the largest cohort of Stage 2 Modern Greek students in the state and very passionate about keeping the Greek spirit alive.

“I am very proud of my background and Greece’s rich history,” said student Michael Margiannis who migrated to Australia from Kalamata, nine years ago.

For student Sofia Zavlagka, who immigrated to Australia from Greece last year, learning the language is the way to acquire a different perspective of the world.

“The Greek language is base to many other languages and by understanding Greek one can have a more diverse perception of the world around them,” she said.

Sofia, born in Greece to an Australian mother, was the one who motivated her family to move back Down Under so she can have a better future.

Bold, with love, passion and meraki. This is our next generation and we all should stand-by them, united along the way.