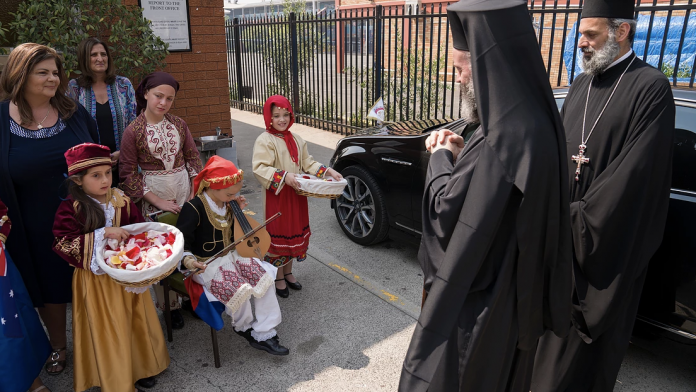 On Tuesday, 19 November, His Eminence Archbishop Makarios made his first official visit to the Greek Orthodox College of Saint Euphemia, in the suburb of Bankstown, Sydney.

His Eminence was welcomed into the college by many young students who were decorated in traditional Greek costumes. Among them was a schoolgirl who welcomed him with her Cretan lyre, wearing a traditional Cretan costume.

The welcoming event for the Archbishop, which was organised by the administration, teaching staff and students, included activities which were undertaken by the school children, such as reciting Cretan Mantinades, dancing sirtaki and singing to classic Greek songs.

n his brief address, Archbishop Makarios drew the attention of the students to the importance of studying in a Greek Orthodox college and highlighting what makes them stand out from the rest of the country’s schools, despite potentially less facilities or greater financial opportunities. The Archbishop explained that the greatest difference is observed through the Colleges’ opportunity of being close to the Church and having Christ constantly in their lives.

“You can have a lot of things in your life, they can give you a lot of gifts,” he said, “but the most important thing is what this particular school will offer you”.

During the event, the students of the College offered Archbishop Makarios a pen as a commemorative gift, after which he promised to use the pen to sign their diplomas.