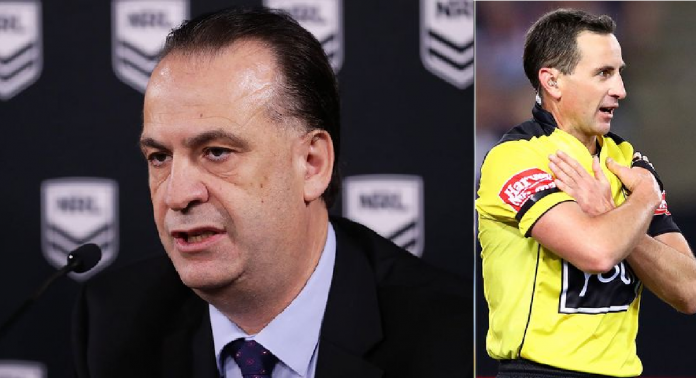 ARLC chairman Peter V’landys has expressed his anger at match officials, revealing that the NRL is facing up to $200,000 in legal costs to resolve a dispute over referee cuts.

The dispute is in response to the referees’ association disagreement with the decision to reduce the number of on-field referees from two to one ahead of next week’s season start date.

“We made an offer to the NRL with respect to helping them save some costs and a few other things, but they were rejected,” said the chairman of the Professional Rugby League Match Officials, Silvio Del Vecchio.

The proposed industrial action, which includes threats to strike, has been branded “selfish” by V’landys — who remains adamant the switch from two referees will not only make the game more entertaining, but also improve officiating and save money.

“We were prepared to give them their request of 100 per cent … every participant group has been in the trenches with us except them. Everyone else in the game has taken a cut, the commission, the executive and the players but the referees don’t want to take a cut,” V’landys said.

The NRL also offered to review the new system once the season was over.

“We put an offer to them that we would review the situation at the end of the season and if the one referee didn’t work, we would revert back and they would be part of the working group looking into it,” the Greek Australian Chairman adds.

After losing hundreds of thousands of dollars in revenue as a result of the coronavirus outbreak, legal fees were the last place that V’landys wanted to see the money end up.

“This money could have saved some clubs in the bush or gone to junior rugby league,” V’landys said.

“They’re all struggling. The last thing the game needs right now is to be spending more money on lawyers. It could be more than $200,000.

“But we will fight on because what we are doing is in the best interests of rugby league and making it a better product.”