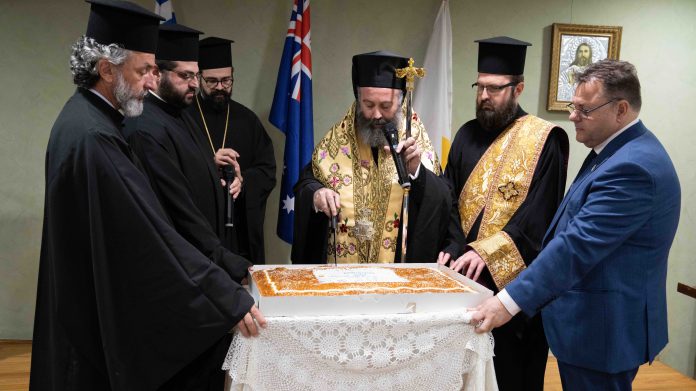 Australian Makarios opens his arms to AHEPA NSW – The first Archbishop to visit the organisation in the 85 years since its foundation.

In a room filled with AHEPA members and friends, His Eminence blessed and cut the vasilopita, and opened a new era in the relationship of the Holy Archdiocese with AHEPA.

Both the President of the organisation, Mr. Vassilis Skandalakis, and Dr. Vassilis Adrachtas, welcomed His Excellency with warm and praiseworthy words.

In his brief address, Archbishop Makarios referred to the spirit of love and unity that must govern the relations of all expatriates, while not failing to uphold the work of AHEPA NSW.

“We need to be united and loved,” he emphasised, while focusing on AHEPA, acknowledging that it was carrying out an important task that “society needs”.

“I open my arms to you, I open my arms to the Archdiocese, I give you my heart and tell you that we must come together and be one,” he said. “Because we have the same blood, the same origin, the same God,” he continued, “and, above all, we have nothing to share in substance. We have a common purpose and a common eschatological destination. So, with my presence here, I want to prove in practice what I promised the Board of Directors, who recently visited me. That we should all move forward together,” said His Eminence.

During the event, the Chairman of AHEPA NSW, Mr. Skandalakis, announced that AHEPA would support the work of the Theological School of St Andrew, offering $10,000 per year, for 10 years, and donated a $5,000 check, which will be used to upgrade the Archdiocese’s new youth centre.

In addition, $1,000 for each of the above purposes was donated by the Chairwoman of the Hellenic and Greek Cypriot Women of Australia (OEEGA), Mrs Irene Anestis, who is also a member of AHEPA.

Mrs Anestis addressed the Archbishop with very warm words and was clearly moved, noting: “God sent you to unite the whole of Hellenism in Australia”. For his part, His Eminence thanked everyone warmly for their offers and wished them a blessed year.