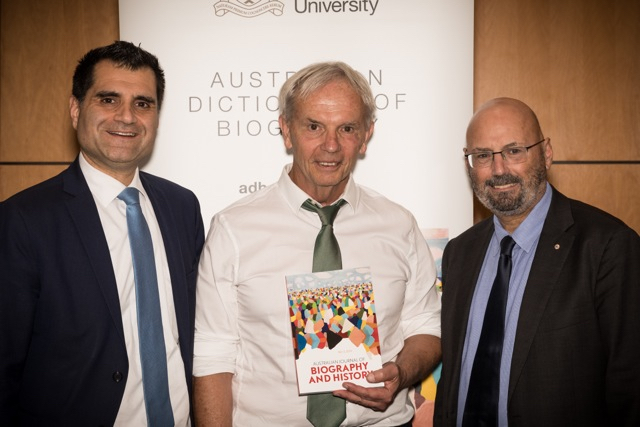 When the Australian National University in Canberra decided to publish their 2019 Australian Journal of Biography and History for the second year in a row, the editors decided they wanted to do a “special edition” focused on Canberra.

From there, the editors of the journal got in touch with active member of the Greek-Australian community in Canberra, John Kalokerinos.

“They really wanted to make sure it wasn’t just about the ‘typical’ stories, but also migrant stories and other groups,” says John.

This was where the idea to write about the migrant story of his parents came to light, and his article ‘From Kythera to Canberra: Vince and Viola Kalokerinos: A migration study’ was born.

The Greek migrant story and the strength of the Greek woman

The Greek migrant story has a rather similar pattern from the post WWII migration, where young Greeks moved to Australia, or other areas of the globe, and worked hard to establish strong foundations for their future families.

“Both of them worked very hard, which is the typical migrant story, and both of them were community contributors,” says John.

What makes his parents story different, which he focuses on in his article, is his mother.

“My mum, during dad’s lifetime, was more like the typical Greek migrant woman who is living in the shadow of her husband,” John starts.

“After dad passed away, she really grabbed the opportunity with both hands. Everyone thought she would just be the typical Greek widow who will close in on herself and on her family. She actually continued to run the shop for 5 years…it showed her that she could do more than what she had done before. After that, she has blossomed in the most extraordinary way, by getting involved in community organisations.”

The importance of community

This devotion to community is something that John has held particularly close, as a lesson from his parents that he aims to share with others.

“It’s relevant in a different way for us now…there’s other things we have common or community interests in.”

Though, it wasn’t until John became a father himself that he truly understood the importance of community involvement.

“I see myself caring about the Greek community more now that I have kids. I want to send them to Greek school, to do Greek dancing, I want them to go to Greece and have their language so they can talk to their cousins over there,” says John.

John has established himself in the Canberra community and the wider Greek-Australian community. He was the President of the Hellenic Club, a member of the University of Canberra Council, a member of the ACT Place Names Committee, in the Australian Instititute of Company Directors (ACT Division), a Director of the Canberra Symphony Orchestra and the National Heart Foundation (ACT).

Growing up in a shop

John was born and raised in Canberra to Vince and Viola Kalokerinos. He also has a brother and a sister who both became teachers, while he became a lawyer and now works in government. He says his parents believed in the value of education, and to them he credits the opportunities he was given with their hard work ethic as a constant benchmark to look up to.

John and his siblings, however, did not fully escape the essence of hard-working migrant life, as the Kalokerinos family ran the successful Curtin Milk Bar that operated 7 days a week. The children all helped run the shop, even more so when Vince passed away.

Growing up in the milk bar is another sector of the Greek migrant story that is more relevant to the middle-aged generation of Greeks today.

John got a lot of inspiration for his article from the work of Leonard Janiszewski and Effy Alexakis, who are academics from Macquarie University who have focused their work on the Greek Cafes and Milk Bars in Australia.

Due to ANU’s commitment to diversity in this years Australian Journal of Biography and History, the university decided to host their journal launch event at the Hellenic Club of Canberra.

“The University wanted to partner with the community,” explains John.

Some honourable guests that attended included Australia’s new Ambassador to the US Arthur Sinodinos, the Consul of the Cyprus High Commission, Mr Vakis Zissimos, the General Editor of the Australian Dictionary of Biography, Professor Melanie Nolan, the Head of the School of History at ANU, Professor Frank Bongiorno, the President of the Canberra and Districts Historical Society, Mr Nick Swain and the President of the Greek Community of Canberra and Districts, Mr John Loukadellis.

The greatest lessons from the Greek migrant story

John was inspired to write this story as a dedication to his parents, and to recognise the product of their hard work. Though, his particular recognition of his mother’s strength is a more rare part of the migrant story that recognises the changing dynamic of the Greek woman, particularly in the community space.

“Although their story is typical of Kytherian migrants…the atypical thing is that great working contribution…You don’t know what your capabilities are or what’s around the corner, but you can do great things,” said John.

Finally, he wishes to conclude that the biggest impact his parents had on his life were the lessons they left behind.

To read John’s article in the journal click HERE.