‘The culture is impressive’: Yawen Wu on why she loves all things Greek 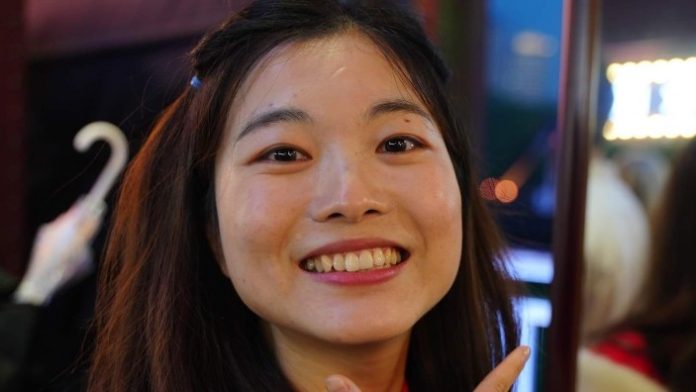 Her image has become familiar in recent weeks on Greek television channels. “Sweet Hope,” Yawen Wu, is a young Chinese woman from Beijing, who speaks Greek better than many of our compatriots.

This fact was a pole of attraction for several media organisations, who were curious with the image of the young journalist, who decided to learn a difficult language like Greek.

And not just to learn Greek but also to sing classic songs by Dionysis Savvopoulos to modern ones, such as Elli Kokkinou and Tamta. Her story aroused the curiosity of The Greek Herald and we decided to follow her trail on the “Silk Road.”

The first question was the one anyone would ask. What made her learn Greek?

“Because the west wind blows in the East! I’m kidding,” Sweet Hope tells us playfully during her interview with The Greek Herald.

“I first heard of Greece from mythology and from the Aegean Sea, which I have connected with romanticism.

“In China, at the time I was finishing school (that is, about 8 years ago), there were 2 or 3 universities which offered courses of study in Greek literature. I chose the specialty to get to know Greece and its language better…”

In Greece, we usually jokingly say when something is difficult to understand that these are “Chinese for me.” Sweet Hope knows both languages and we asked her which seemed more difficult to her.

“Greek. And I say this without hesitation,” she tells us in impeccable Greek.

“I am Chinese, so my mother tongue is not at all difficult for me. I must say that Chinese and Greek are two completely different languages. Greek is simpler than Chinese, which has symbols. But as far as grammar is concerned, I confess that Greek is very, very complicated.

“There are so many changes in inclinations and times. Learning the Greek language makes it difficult for me but I will not give up. After all, now my work has to do with Greece,” Sweet Hope, who works in Beijing as a journalist in the Greek language service of the International Chinese radio (CRI), says.

Born in the southern province of Chiangsi, she studied at the Department of International Studies at Shanghai University and was enchanted by Greece, which she has visited once.

“I went to Corfu for two semesters as part of a student exchange program between the two countries in 2015 to 2016. My experience there was so good that it gave me the determination to deal with Greece through my work,” she says.

“Clear sky, blue sea, mountains and architecture. It’s like heaven. Greeks are friendly people and live next to nature.

“In addition, history and culture are impressive. Of course I also went to Santorini, it was beautiful but it seemed to me like I was in China. A lot of my countrymen were everywhere. I prefer Crete that does not have so many tourists and has a long history.”

The question of learning a foreign language becomes difficult when you have no people to speak it. The same – more or less – may be the case with some Australian Greeks, who are trying to learn Greek in a country where English is the basic language.

“For reading and writing it is not so difficult. I find sources. But in the matter of speech there are difficulties. I try to find chatters but it’s not the easiest thing. Of course, there are Chinese who know Greek as well as Greek in China but I don’t have the chance to meet them. Maybe my work will help me,” she says.

“I work as a journalist at China Media Group, which is like ERT in Greece and which has an international section with about 60 languages. I work in the Greek Department and there we generally report news about China and Greece, aiming to deepen the knowledge and communication between the peoples of the two countries.”

The pandemic in China and the goals:

The pandemic is constantly present on the planet. Sweet Hope gives a response to The Greek Herald from the country, where it all began.

“The situation of the pandemic in China is much better and life has returned to normality. People go out, shops open normally. But we still wear a mask indoors,” she explains.

“I went through a very “difficult” time due to the pandemic. I couldn’t go out at all, I had to work from home, but I always thought it was a necessary measure to fight the virus. In the end we made it.

“More and more people in China have been vaccinated, I believe that we will quickly live a simple but happy life.

“I want to do my postgraduate studies in Greek or in the media and in addition to having a better knowledge up close about the daily life, history and customs of this charming country.

“I, a Chinese woman who knows Greek, will be a bridge between the two peoples, where there are many similarities. I would like to contribute to the understanding that the two peoples are very similar and to strengthen their cooperation and communication,” Sweet Hope concludes.