Kastellorizian diaspora in Australia share how their roots have shaped them 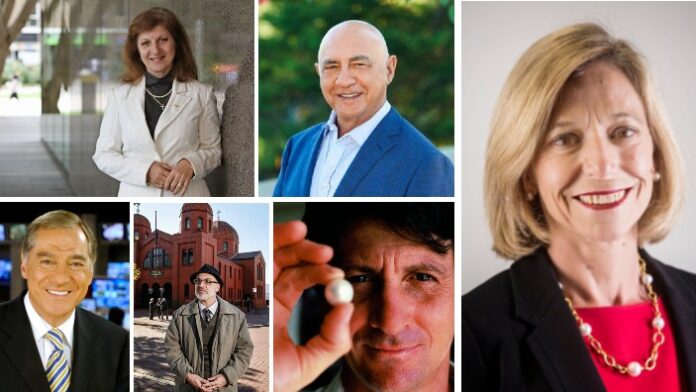 In a special interview series by Greece Is, distinguished members of the Kastellorizian diaspora in Australia have spoken out about the ways in which their roots have defined them.

This is what they had to say:

Emeritus Professor from the University of New South Wales’ School of Chemical Sciences and Engineering.

In her interview, Mrs Skyllas-Kazacos describes how although she was born in Kalymnos and migrated to Australia at a young age, she became a Kastellorizian by marriage.

“My husband Michael Kazacos… who made me a “Kazzie-by-marriage,” is part of a large Kastellorizian-Australian extended family who, like so many other Kastellorizians, came to Australia to work hard and build a better life for their familiesm” Mrs Skyllas-Kazacos tells Greece Is.

“As I came to know that extended family, I began to understand their deep-rooted love for and loyalty to their island.”

From there, Mrs Skyllas-Kazacos described her first trip to the island with her husband in 1985 and expressed her wishes that one day she is able to introduce the island to her grandchildren as well.

“As we got closer to the island and started to turn into the harbor, I was overcome with emotion as the small buildings and boats came into view – it felt as if we’d been transported to a different world, a different time,” she describes.

“Suddenly I knew why this tiny jewel in the Aegean Sea meant so much to its people and even to their descendants who had never known it.”

Head of the Paspaley Group in Darwin.

Nick Paspaley is connected to Paspaley Pearls, a company which is renowned for its beautiful pearl jewelry. Nick tells Greece Is that he thinks of Kastellorizo as “my patriarch.”

“My father passed away in 1984. He was very close and dear to me, and I am conscious that I exist because of him. My father existed because of Kastellorizo, so in a real sense I view Kastellorizo and my father as being the same thing. In this way, when I think of my father, I also think of Kastellorizo as my patriarch,” Nick says in the interview with Nicholas Pappas.

“I have very close friends in Australia who, coincidentally, also have roots in Kastellorizo. It’s interesting how successful those friends have become, just as my father was successful in his life.

“If asked how I identify myself: I simply consider myself as a Kastellorizian who is an Australian citizen.”

Well-known historian and academic in Perth.

Dr John Yiannakis begins his interview describing hos growing up in Western Australia, he was aware of its Greek world but “not appreciative of it or the Kastellorizian presence within it.” He stresses that this awareness came in his mid-teen years.

“Certainly, growing up in pre-multicultural Australia had its challenges. Yet, I knew there was something special and worthwhile about my Greek background, although at times as a teenager I tried to downplay it,” Dr Yiannakis told Greece Is.

“I came to realise that Greeks in this state, and Kastellorizians in particular, have made an extraordinary contribution at every level and in every sphere. From laborers to lawyers; academics to artists; entrepreneurs to sportspersons.

“In fact, the only non Anglo-Celt Governor of Western Australia has been a Kastellorizian. Despite their parochialism, there is a dynamism about Kastellorizians and a willingness to work for a greater good.”

Kerry Harmanis’ Kastellorizian roots are ingrained in him. He describes how his great-grandfather, Manolis Margaritis, lived with his family on Kastellorizo from at least 1860, his grandfather and father were born there, as well as his mother’s father.

“Being of Kastellorizian roots I have business, commerce and the sea in my blood, along with a strong and dynamic personality; I’m sometimes excitable, I love life, I laugh a lot and I work hard,” Harmanis says in the interview.

“The Kazzie community in Australia has done very well in commerce, academia, business, leadership – anywhere politics and argument exist, or else we aren’t Greeks!”

The business magnate then goes on to stress how the Kastellorizo community in Australia always comes together to support and promote their Greek heritage.

“A lot of money flows from Australia and the other Kastellorizian diasporas to the island. They have built houses and restored the island to the extent that it’s a very comfortable place now,” Harmanis says.

“Although we’re all busy in our own worlds, we still get together and are still close friends, no matter how long it’s been since we’ve seen each other.”

John Mangos is a well-known TV presenter in Australia and he tells Greece Is how he has been a frequent visitor to the island of Kastellorizo for over 40 years, even becoming a part-resident after having built a home there.

“My family and friends all know it’s where I wish to be laid to rest. Why do I feel this way? I grew up in an environment where my family only socialised with the extended family and other Kastellorizians, holding picnics and name day celebrations,” Mangos tells Nicholas Pappas.

“It was indeed insular, and it was somewhat competitive with those from other parts of Greece, too. A strong sense of patriotism and resilience developed. I was personally unaware that our culture, cuisine, music and dialect was different to other Greeks; I thought our way was the norm.

“With this camaraderie came a strong sense of identity and pride… Kastellorizo is not just in my blood. It is in my heart, my soul and my state of mind. I am known to say that my body lives in Australia but my true self lives in Kastellorizo.”

A well-known medical practitioner and the daughter of the late Michael Kailis of the seafood and pearl industries fame in Perth.

Dr Kailis reminisces her first ever trip to Kastellorizo in 1975, and describes how she saw her dad, Michael George Kailis, cry for the first time as he saw that the island needed revitalising.

“My father could see the island needed revitalising. With my mother, Patricia, and with the help of the architect George Murray, they poured love and effort into one of the first house restorations on the island. They also commissioned Dr Norman Ashton to research ancient Megisti. And no one will ever forget my sister Amanda’s tours of the patitiria (wine presses)!” Dr Kailis tells Greece Is.

The medical practitioner then goes on to describe which parts of her personality she believes come from Kastellorizo.

“…I am sure my little stocky legs that love climbing up and down mountains come from there. In my office, I have pictures and paintings of the place to gaze at every afternoon, and I think about walking up the mountain to see the sun set or diving into the amazing blue waters,” she says.