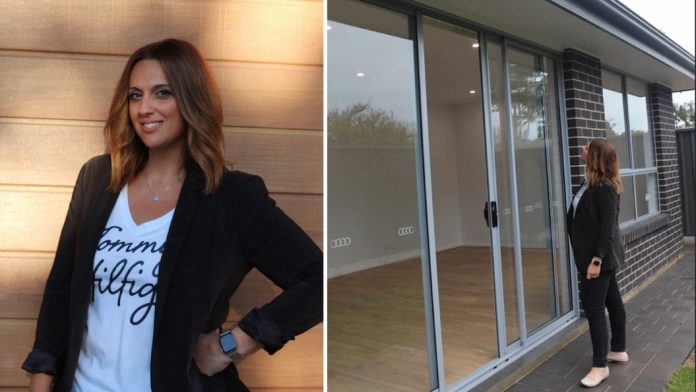 Building and construction is the nation’s second largest industry but women currently make up only 11% of the industry’s total workforce and only 1% of building trades.

“By sharing my story I hope to inspire other women to enter the industry, support them overcome the challenges I have faced and educate male colleagues about the current gender gap issues,” says South Australia’s first female building inspector, Litsa Adamou.

The number of women succeeding in male-dominated fields across Australia has increased greatly in the past five decades and although between 2010 – 2020 the percentage of female construction apprentices has doubled high attrition rates maintain the deficit.

But Litsa Adamou is optimistic.

“If I can do it anyone can,” she says, as she explains how from senior leadership roles she found her passion in building and construction.

A leap of faith

Born on the Greek island of Samos, Litsa Adamou lived most of her childhood in Adelaide and the best part of her teen years in Greece where her parents moved back to in the mid 90s.

She returned to Adelaide in 2001 where she pursued her studies and five years later began her career as a public servant.

“In 2019 I was promoted to Assistant Director in the Federal Government. I had achieved my career goal 10 years earlier than I expected but I was not professionally fulfilled.

“The same year with this promotion, I had a day off work and I was of trying to work out what I wanted to do for the next 30 years of my career. My husband Barney said he had an inspection to do in the Barossa Valley that day and that I should join him,” says Adamou.

“I remember the feeling of walking into this new home and helping with the inspection and Barney turning around and telling me that he had not seen me this happy for a long time. At that moment I had my answer… I could do this!”

“That is when in late 2019 I took my leap of faith to join my husband in the building inspection industry.”

‘I see the challenges as an opportunity’

Litsa Adamou has been in the industry for two years now. She has completed her building and construction as well as project management qualifications and is also a holder of a General Builders License.

“I love the diversity of my job. Every home I inspect is different and every home has a story. However, as a female building inspector I have faced many challenges.

“On site, I have been asked countless times about my qualifications and background; almost as a way of validating my ability to do my job.

“My findings have been questioned and I have been told that I am wrong many times by males threatened by my confidence and leadership,” Adamou says.

“If anything, I saw the challenges I faced as an opportunity to showcase my skills and to carve the pathway for other women in the industry Every little bit we do, helps.”

“I strongly believe that a person’s ability to do a job should be based on skillset and passion and not gender.

“One of the most important lessons I have learnt through this journey is to persevere and never give up. One cannot inspire change otherwise,” she says.

Despite the hurdles she’s faced the fact that Litsa Adamou has clocked up thousands of building inspections so far speaks to the professional rewards within Australia’s fastest booming industries.

“Back yourself with all the knowledge and skill to succeed in a profession that is largely unregulated with no minimum requirements or qualifications to become a building Inspector,” she advises her future colleagues.

“It is not an easy profession, it’s one that you are constantly learning but it’s rewarding helping people achieve their dream of home or investment ownership.”

Asked which are the values that she grew up with and applies to her work Adamou taps into her Greek roots.

“Respect (sevasmos), Filotimo and looking out for each other.”