Chris Christofi: The man on a mission to end homelessness in Australia 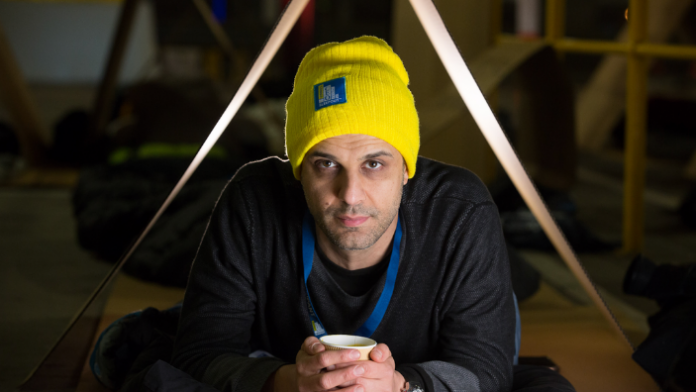 Leading Australian businessman, entrepreneur, author and renowned philanthropist, Chris Christofi, has embarked on an ambitious campaign to break the all time donation record for this year’s Vinnies CEO Sleepout, setting the lofty goal of raising $250,000 for charity.

Growing up with a strong work ethic in a Cypriot family, Chris owned eight properties by the age of 24, only to lose them all when the partnership collapsed. He went on to start his business, Reventon, from his parents house at the age of 25 with $348,000 worth of debt.

Chris is set to participate in his 5th Sleepout for charity. This year’s event will be held at the Port Melbourne Timber Yard on June 23.

Chris’ aim is to raise and donate a quarter of a million dollars to help improve the homelessness epidemic in Australia and he is so determined to contribute to the mammoth task ahead of him, that he will be matching all donations – for every dollar raised, he will donate an additional $3 himself.

“I’m looking forward to joining the Vinnies CEO Sleepout for another year. Homelessness can happen to anyone; it can be nothing more than an unfortunate set of circumstances,” Chris says.

“I experienced financial hardship in the early days of my career and I’m acutely aware that it could easily have been me if I didn’t have the support of my family. It’s so important we always show kindness and compassion to our fellow human beings in need.”

In 2021, Chris placed 2nd out of 206 CEOs in Victoria and 4th out of 1,613 CEOs Nationwide, placing him in the Top 0.25% of all fundraisers. His efforts have seen him named an ambassador for the CEO Sleepout and appointed as the 2021 Face of the Vinnies Campaign.

Chris has raised almost $300,000 for the CEO Vinnie’s Sleepout since 2018 and following this year’s sleepout he plans to build a house with all the money raised and auction it off, giving all proceeds to St Vincent de Paul.

“Through his involvement with Vinnies CEO Sleepout, Chris has demonstrated real ‘leadership with compassion’. He has gone over and above to get a real understanding of the issues facing people in his city,” General Manager of St Vincent de Paul Society Victoria, Andrew McKenzie, says.

“I remember Chris coming out with the Vinnies volunteer teams on our nightly Soup Van runs. He wanted to roll his sleeves up and be the one meeting, talking to and, most importantly, listening to those he was assisting with sharing food.

“Chris sets a real example amongst business leaders as to how to engage with the issues being confronted by people every day. The way he brings his professional expertise as a CEO to complex issues is both impressive – and practical.

“Vinnies are very proud to have Chris involved in our CEO Sleepout. His fundraising will make a real and tangible impact for people doing it tough across Victoria.”