13-year-old, Marianos Nikolis, on his dream to become a MotoGP world champion 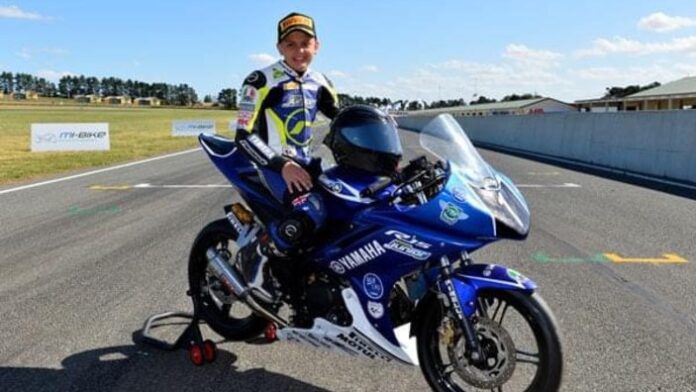 At the age of 4, Marianos Nikolis’ dad bought him his first ever motorbike and he never looked back. Nine years later and he’s competed in a number of motorbike tournaments but ultimately, his dream is to compete in “the Formula One of motorbikes” – the MotoGP.

The Greek Herald sat down exclusively with the now 13-year-old to hear more about his dream and future plans. This is what Marianos had to say…

I first got involved in motorbike riding when my dad bought me my first bike when I was 4 years old. My dad and my brothers rode so I followed my brothers’ footsteps as I looked up to them and wanted to beat them.

My first race was at my home club, ACT motorcycle club. I was very nervous. The butterflies were rising through my stomach. I twisted the throttle and never looked back, and I knew I loved racing and loved the sport. I loved the feeling of going so fast.

2. What do you love the most about competing?

The thing I love most about competing is the adrenaline rush you get from being so close to the ground at such high speeds, trying to push to the absolute limit to beat the other riders. It just makes me feel at home.

3. Can you tell me a little bit about how the MotoGP works?

MotoGP is the highest level of motorcycle racing in the world. It is the Formula One of motorbikes.

4. What would you like to say to other young Greek Australians who want to get involved in motorbike riding?

To any other young Greek Australians that want to get involved, it is a great sport. I’ve made friends from all round Australia. I’ve met a lot of people that I look up to, young and old, that are very successful in this sport. This sport can be very rewarding and very challenging at the same time, it takes a lot of perseverance and dedication as it has a lot of highs and a lot of lows.

5. What are you future plans and is there anything else you’d like to say?

My future plans are to continue to become a world champion but at the same time, I need to find sponsors that can support me to achieve my goals as motorcycle racing is very expensive.

Share
Facebook
Email
Twitter
Pinterest
Linkedin
WhatsApp
Viber
Print
Previous articleZoe Ventoura on motherhood, work and growing up with a Greek musician father
Next articleAHEPA Chapter Artemis to hold lecture on the contribution of women to the Greek Revolution