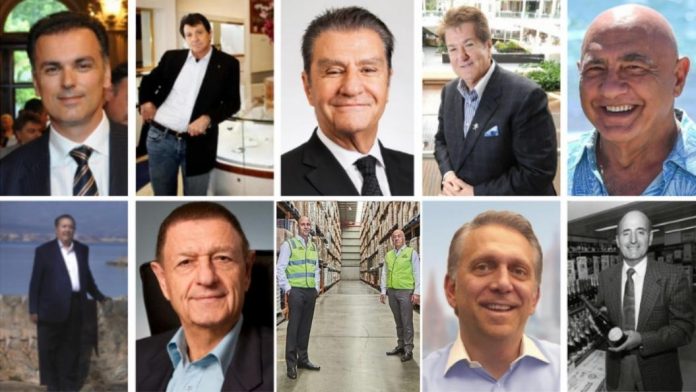 The Australian has released its annual list of Australia’s 250 wealthiest individuals and among the names are 11 Australians of Greek heritage. Four out of these 11 have made their debut on the list.

Who are they and how have they become so successful in life? The Greek Herald finds out.

Nick Politis is the Owner of WFM Motors and Director of AP Eagers. He is the most successful car salesman in Australia, with an empire that includes dozens of his own car dealers in Sydney, Melbourne and Queensland. He is also the Chairman of the NRL club, Sydney Roosters.

Theo Karedis is the co-founder of Theo’s Liquor and Arkadia Property Group. The Karedis family fortune stems from the Theo’s chain of bottle shops sold to Coles in 2002. Arkadia owns 25 mostly retail properties around Australia.

Nicholas Paspaley is the Executive Chairman of the Paspaley Group of Companies. The Group has a pearl retail business, an aviation and marine services division, pastoral and tourism holdings, and a property portfolio.

Dennis Bastas is the Founder, Chairman and CEO of Arrotex Pharmaceuticals. He has made his debut on the Rich List this year. Arrotex makes about one-third of the drugs dispensed under the Pharmaceutical Benefits Scheme and turns over $1.1 billion annually.

Father and son duo, Terry and Arthur Tzaneros, own ACFS Port Logistics, the largest privately owned container logistics operator in Australia, and freight logistics firm, AGS World Transport. This is their debut on the list.

Nick Andrianakos is the Founder of Milemaker Petroleum and Nikos Property. This is his debut on the Rich List. The Milemaker chain comprised 54 sites when it was sold to Caltex in a $94 million deal in late 2016. By then, Andrianakos was already investing in commercial property and crucially he also kept the freehold sites of the petrol stations.

Con Makris is the Chairman of Makris Group and although he has been gradually selling down his property portfolio in recent years, he retains substantial assets on the Gold Coast and shopping centres in Adelaide and Melbourne.

Spiros Alysandratos is the founder of one of Australia’s biggest backroom travel companies, Consolidated Travel. His business sells ticketing technology and services to airlines and travel agents, and also travel insurance products.

Kerry Harmanis is one of Western Australia’s most successful mining executives and investors, making more than $400 million from the sale of his former nickel play Jubilee Mines to Xstrata in a $3.1 billion deal in 2007. He now has shareholdings in several listed mining exploration companies.