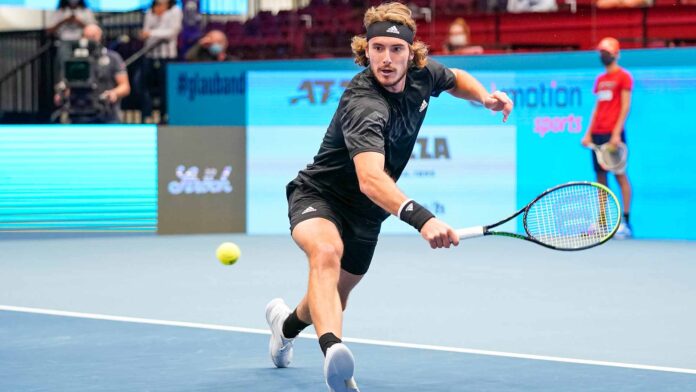 Greek tennis player, Stefanos Tsitsipas, had to switch his shoe in the third set of his first-round match against Jan-Lennard Struff at the Erste Bank Open on Wednesday, but that didn’t stop the third seed from rallying past the German.

The reigning Nitto ATP Finals champion raised his level as the match wore on to oust Struff 6-7(3), 6-3, 6-4 in one hour and 52 minutes. Tsitsipas will next play former World No. 3 Grigor Dimitrov, who also has triumphed at The O2 in London (2017).

“I’m happy that I was relaxed and in that kind of state of mind and mood. I think it helped overall my performance today,” Tsitsipas said in his on-court interview.

“For sure there are a lot of benefits you can take when you’re playing relaxed and when you’re not panicked.”

Tsitsipas and Struff entered this match tied at two wins apiece in their ATP Head2Head series, with three of their clashes going to a deciding set. The pivotal moment in Vienna came at 1-1 in the third set. Just before Struff served to begin the game, Tsitsipas realised he needed to switch his left shoe.

When play resumed, the Greek broke serve and he never looked back. Tsitsipas only lost three service points in the decider, landing 83 per cent of his first serves in the set to put pressure on the German.

The World No. 5 clinched his victory with a forehand winner, advancing to the second round on his debut at the ATP 500.

“I think Jan played good today and we were both serving well, [playing well] from the baseline. I wouldn’t say there were many rallies,” Tsitsipas said.

“It was a demonstration of serves and I managed to overcome the difficulties that were presented in his service games.”

For much of the early part of the match, Struff controlled play with his big serving and powerful groundstrokes. But he relinquished a pivotal break at the end of the second set by missing a high forehand volley into the net. That proved the opening Tsitsipas needed. He takes a 1-0 ATP Head2Head series advantage into his meeting against Dimitrov.