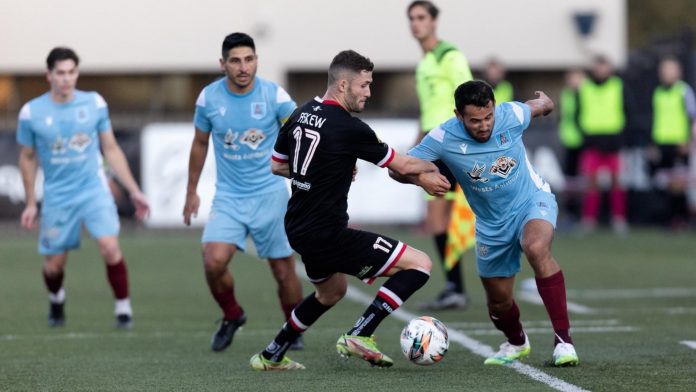 Sydney Olympic battled it out with Wollongong Wolves on Monday afternoon of the Queen’s Birthday long weekend, ultimately ending in a 1-1 draw in the last game of Round 15 in the National Premier Leagues NSW Men’s competition.

The spectators had hardly sat down in their seats when Ray O’Donovan scored for Sydney Olympic after only 30 seconds.

Wollongong then had a series of strikes without any luck, starting in the 6th minute when Leroy Jennings shot from distance, but it was well saved by Nicholas Sorras diving to his right.

Darcy Madden scored the equalizer in the 94th minute after Nick Littler’s free kick from the right which went straight into the box where he was waiting and his side volley from close range was too hot to handle and the Wolves bench jumped for joy.

After the game Sydney Olympic coach Ante Juric emerged from a very quiet dressing room but still had many positive things to say about his team.

“We are a bit down but we have high expectations and it’s still a good result against a good team,” Juric said.

“A lot of their first half chances were from 20-25 metres out, so it wasn’t close and I thought that we had the best of the chances.

His counterpart at Wollongong Wolves Luke Wilkshire was happy with the draw and perhaps a little relieved too.

“It’s disappointing to concede a goal after 40 seconds but I thought that the first half was one of the better halves that we have played,” he said.

“We had our chances and definitely deserved at least a point tonight. Our character is great and it showed tonight how we kept going and got that point in the end.”