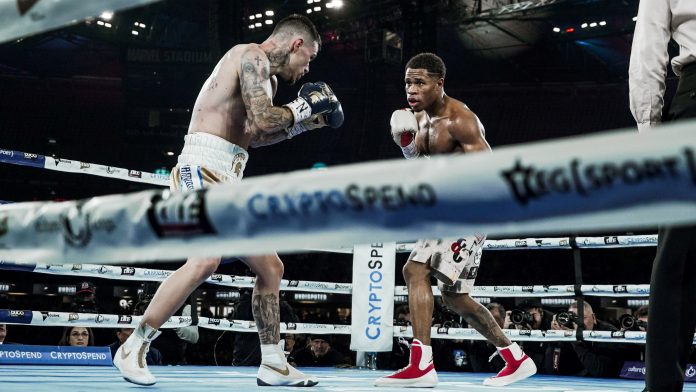 On the opposite end and seated behind a Greek flag is George Kambosos Jr’s camp which included his wife Rebecca and undercard fighter, Terry Nickolas.

“Come on George!” Rebecca shouted whilst Terry is completely fixated on the 12 rounds of war taking place in the centre of Melbourne’s Marvel Stadium.

With 41,192 spectators filling the stadium, every punch the Greek Australian landed was met with a resounding roar.

It was unmistakable that this was a pro-Kambosos crowd.

Despite the raucous that ensued throughout the 36 minutes of fighting, silence fell as the decision was delivered from the booming voice of legendary ring announcer Michael Buffer,

“All three judges have it for the win by unanimous decision.”

As Haney’s arm was launched in the air, a smiling Kambosos began applauding before personally handing over his IBF, WBO and WBA world title belts to the 23-year-old.

Speaking to the crowd, a puffy-eyed and scuffed Kambosos was draped in both the Australian and Greek flags as he said: “Thank you to everybody in Australia, everyone in Greece and everyone in the world.”

As part of his agreement with Haney, Kambosos has a rematch clause available, meaning he could exercise his right to redemption at his own discretion.

“I’m going to change a few things and get him back at the end of this year… we’re doing it again,” he promised.

“Respect to him and respect to boxing. This is boxing, you fight the best, wins or draws this is what it’s about.”

Earlier in the day, Terry Nickolas drew against Lachlan Higgins. At the conclusion of the fight, the pair embraced in what appeared to be an emotionally charged moment for Nickolas.

Since then, the Greek Australian boxer has revealed in an Instagram video that he dedicated the fight to his brother Angelo who had passed away earlier in the week.

“I want to dedicate this fight to my brother Angelo. Rest in peace bro, I’ll never stop fighting for you man and I’ll always make you proud no matter what. I love you man and I’m gonna miss you, nothing is ever going to be the same without you,” Nickolas said.