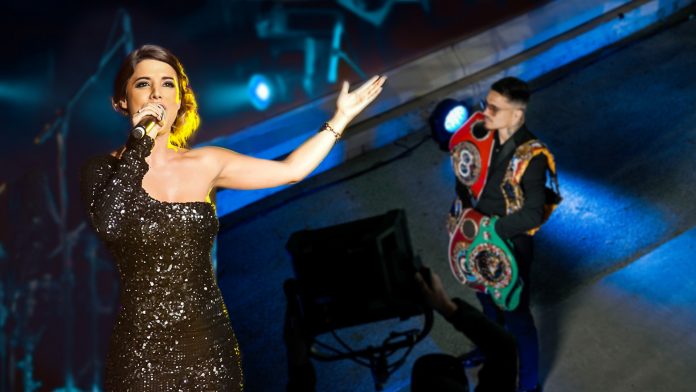 As she takes the first sip of her hot tea, Tina makes it known that it is infused with lemon and a drop of manuka honey. “Just like a pro,” she says cooly.

She quickly follows her confident remark with a nervous: “that’s what they do right?”

What started as a quick phone conversation to congratulate Tina Kokkalis on being chosen to sing both the Australian and Greek national anthems at George Kambosos Jr’s mega-fight in Melbourne today, quickly turned into an impromptu stand-up gig.

In the captain’s seat: the Greek-Australian singer, whilst I sat back and strapped in for the ride.

Having been doing the rotations as a live Greek performer around Australia since 2006, Tina more readily describes herself as a corporate professional, an ex-solicitor, a wife and a mother-to-two before referring to herself as a professional singer.

“I’m not a professional singer – I’ve never had a singing lesson. Singing was something I always did at home growing up and I always liked it,” the Sydney-sider says.

In 2005, Tina was in her final year of studying law and she threw her “hat in the ring” when she auditioned for the Greek singing reality tv show ‘Dream Show – The Music’ whose most famous alumni is Nikos Oikonomopoulos.

“My parents didn’t want me to do it. It was February, I was starting my last year of university and it was winter in Greece.

“They were confused because they left Greece for a better life and here I was running on back,” she laughs.

When I ask her how she found herself Melbourne-bound and singing from within the ring at Marvel Stadium today, she lets out a nervous laugh before detailing the week that was.

“I got a call on Tuesday to be on standby because Maria Maroulis was meant to be doing it but she couldn’t make it because she’s filming a reality TV show in Greece and she recommended me for the gig.”

“On Thursday, I got the call giving the green light and that’s when the stress-head, typical Virgo perfectionist came out. I need time to plan things!” she exclaims comically.

“The closer I’m getting to it, the more I realise I haven’t understood it. I go from being a tiny bit excited to full-blown panic mode.”

The panic, whilst induced by her need to “sort out” wardrobe, hair and makeup “of course”, is also instigated by the enormity of today’s event.

Though she has been the Australian supporting act for Greek singing giants like Paschalis Terzis, Dimitris Basis, Giorgos Mazonakis and Nikos Vertis over the years, Tina says they are incomparable to singing just before a world title fight.

“Singing the national anthem is not something you do often and to sing two at a sporting event broadcasted to the entire world is an incredibly unique thing,” the tea-sipping singer says.

Whilst conceding the closest she has ever gotten to a boxing match was a Billy Bank’s Tae Bo workout, she admits she was excited to be part of Kambosos’ history-making fight in a small way and to sing before a sporting event that has united two cultures.

“George is super patriotic and he fights not just for the Australians, but the Greeks of the world. He’s united both through sport.

“We have a world champion who has two national anthems and when I was asked to sing them it made me a little emotional because it got me thinking about my parents.

“My parents came here and worked tirelessly to instil Greek traditions and values in us. We grew up in Cronulla of all places and were forced to go to Greek school and Greek dancing.

“It’s only when your older you appreciate all of that because if it hadn’t been for those things, I don’t know where I would have been today,” she says.

Having flown into Melbourne last night ahead of an 8.30 am sound check this morning, Tina admits that while she wants “to connect with both cultures” she is currently preoccupied with two things.

Today, George Kambosos Jr will face off against American Devin Haney in the hopes of becoming the first-ever undisputed champion of the lightweight boxing division.

Tina will also be there, delivering what she promises will be “a nice and simple acapella” rendition of the Australian and Greek anthems.

She tells me that she too is stepping into the ring with hope. While it doesn’t involve capturing a new belt, it does involve being a singer “who isn’t posted on YouTube for butchering a national anthem.”