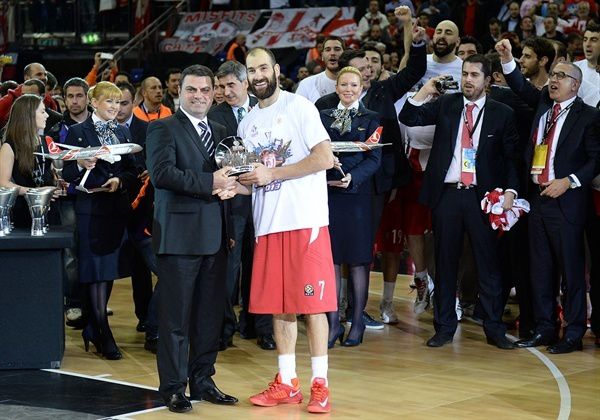 Three-time EuroLeague champion and Final Four MVP Vassilis Spanoulis was announced as the final player to be added to EuroLeague All-Decade Team on Tuesday.

Spanoulis was voted by fans, media, players and coaches and was recognised by EuroLeague as, “one of the best clutch players European basketball has ever seen.”

“Led by his class and willpower, Olympiacos Piraeus became the only team to win back-to-back titles in the 2010s. He is the one and only Vassilis Spanoulis!” a statement by EuroLeague reads.

“It is impossible to review the past decade in the EuroLeague without talking about Spanoulis, a natural-born leader who made his competition debut with Panathinaikos Athens.”

Prior to joining crosstown rivals Olympiacos, Spanoulis was already a EuroLeague champion and Final Four MVP. The EuroLeague recognised him on Tuesday as one of the greatest players in European basketball history.

The announcement arrives in the seven-year anniversary of Olympiacos winning the 2013 EuroLeague.