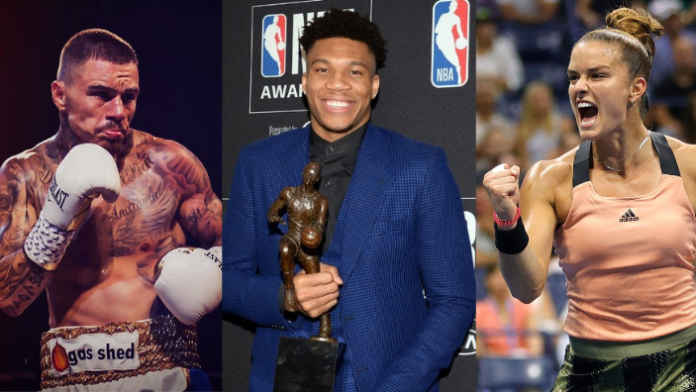 What a year for Greeks in sport! From an NBA champion to a Greek Australian lightweight king, Greeks made their mark on the sporting scene in 2021.

The Greek Herald has ranked the top seven Greek athletes of 2021!

Not even Marcus Stoinis himself could have predicted the incredible year he would have. The Greek Australian cricketer helped Australia secure their first-ever T20 World Cup title, shining in the tournament’s opener against South Africa and in Australia’s semi-final against Pakistan.

The lack of competitions meant Greeks rarely saw Eleftherios Petrounias show his artistic talents on the world stage, but the gymnast still managed to make his mark on 2021.

Petrounias earned a bronze at the 2020 Tokyo Olympics, also carrying the flag in the opening ceremony alongside Anna Korakaki.

Anna Ntountounaki made history for Greece in the Budapest European Championships, becoming the first Greek woman to win a gold medal in swimming at the tournament.

Claiming a joint-gold with France’s Marie Wattel, who both hit a 57.37, she drastically improved upon her 5th place finish back in 2018.

At the 2020 Summer Olympics she finished 9th, achieving a new national record with a time of 57.25 seconds.

If that doesn’t show her growth in 2021, then we’re not sure what will. Maria Sakkari had a meteoric rise in women’s tennis this year, reaching a WTA singles final and becoming the first female Greek tennis player to break into the world’s top 10.

Sakkari also became the first Greek woman to reach a Grand Slam semi-final, achieving the feat both at the Roland Garros and US Open.

It’s hard to believe Stefanos Tsitsipas is only 23-years-old after looking at what he’s accomplished in the last few years. In 2021, the accolades kept coming with his first Masters 1000 title at the Monte-Carlo Masters.

The Greek tennis sensation made history at the French Open, becoming the first Greek player in history to reach a Grand Slam final. Despite losing to Novak Djokovic, he rose to a career-high world ranking of No. 3.

The Greek Freak would be on cloud nine after the year he’s just had. From having a baby to winning his second-straight MVP award to, most importantly, helping the Milwaukee Bucks win the 2020/21 NBA championship.

Scoring 50 points in Game 6 against the Phoenix Suns (truly, what a freak), the Greek star practically carried his team to their first championship in 50 years, also becoming the youngest player since Kawhi Leonard in 2014 to be named Finals MVP.

Just when the year was wrapping up, and all Greek sporting achievements seemed accomplished, into the ring stepped George Kambosos Jr. In a high-stakes boxing match between himself and Teófimo López, where all the odds were against the ‘ferocious’ Greek Australian, Kambosos made history.