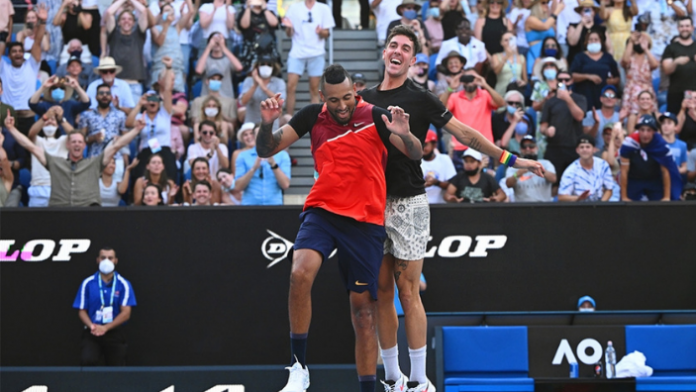 Nick Kyrgios and Thanasi Kokkinakis have booked a place in the Australian Open men’s doubles final with a 7-6 (7/4) 6-4 victory over third seeds Horacio Zeballos and Marcel Granollers.

The final will be an all-Australian affair after Max Purcell and Matthew Ebden advanced earlier.

The Aussie pair were up a break in the second set before drama ensued with Kyrgios serving at 4-2 up and he was broken as the set went back on serve.

But with Granollers serving at 4-5, the Aussies played a brilliant game to break for the match and finished it with a brilliant forehand lob winner off the racquet of Kokkinakis.

“You know I have played a lot of singles matches around the globe with amazing atmospheres, but this week with Thanasi playing in front of you, nothing beats this,” Kyrgios said after the match.

Kokkinakis doubted whether the pair would have made it this far at any other grand slam event.

“To be honest it is all about the crowd and the atmosphere that is what gets us going,” Kokkinakis said.

“Playing in front of you guys brings out the best. I don’t know if we would have this result anywhere else.”