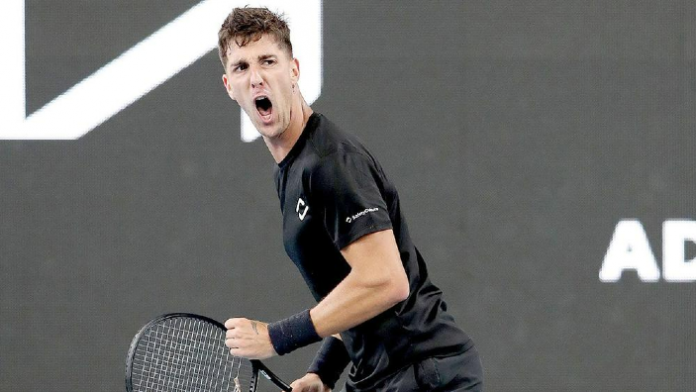 It was another big day of tennis in Australia on Tuesday, with a number of Greek favourites playing matches in Adelaide and Melbourne.

It was a triumphant homecoming for South Australia’s Thanasi Kokkinakis as he defeated fellow Australian John Millman 6-4 6-3 in the Adelaide International first round.

Kokkinakis was close to flawless on serve in the opening set. He won 88 per cent of points on first serve, sending down five aces, striking 12 winners and facing zero break points.

At the start of the second set, Kokkinakis’ first serve percentage dropped from 77 back to 53, and although he was still winning the majority of points when he landed them, it did open the door for the tenacious Millman.

As the 32-year-old Millman lifted his intensity, Kokkinakis found his range again and he played three huge points in a row to break in the seventh game.

Another break sealed the deal in the ninth game with Kokkinakis sending another reminder of his extreme talent.

“I was just happy with my composure. I was able to execute. Worked hard for that break in
the first set. I thought I served pretty well for the most part,” Kokkinakis said in a press conference after his match.

“It was a gruelling year travelling but I’m so happy to play my first professional tournament here in front of my home fans.”

Kokkinakis’ winning performance sets up a mouth-watering clash with No.4 seed Frances Tiafoe. The South Australian has beaten Tiafoe once before, doing so in the first round at Los Cabos, Mexico, in 2017.

“Me and him have been mates for a long time… He’s a good dude, really energetic, obviously a great player. It should be a fun match,” Kokkinakis said.

Valentini Grammatikopoulou won her match at the J1 Traralgon 2022 tournament in Melbourne on Tuesday.

Grammatikopoulou made her debut at the event and beat Romanian, Alexandra Cadanțu-Ignatik, No. 208 in the world, 6-2, 6-2.

Grammatikopoulou, who is at No. 4 on the board, will now face Britain’s, Jodie Anna Burrage, No. 216 in the world, after she defeated the Australian, Isabella Bozicevic, 6-1, 6-0 in just 49 minutes.

Despina Papamichail defeated in first round of Adelaide International:

Greek tennis player, Despina Papamichail, lost 3-6, 0-6 to Czech, Marie Bouzkova, in the first round of the Adelaide International.

“It was a tough match and I am not used to versing players of this level. I take the positives and seek to improve my game. I look forward to playing in Melbourne,” Papamichail told The Greek Herald after the match.

Despina reached the first round after defeating Francesca Jones 3-6 6-2 6-1 and Stefanie Voegele 6-4 7-6 in the tournament qualifiers.