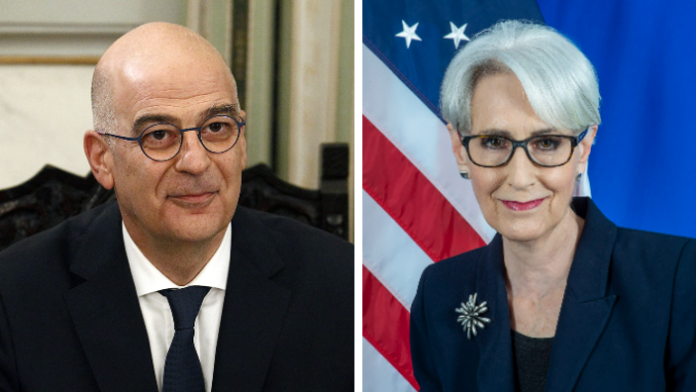 Greek Foreign Minister, Nikos Dendias, spoke with US Deputy Secretary of State, Wendy Sherman, over the phone on Wednesday.

In a tweet, Dendias said he discussed the situation in Ukraine and the Western Balkans with Sharman, and also briefed her “on Turkey’s recent provocative statements.”

The Deputy Secretary and Foreign Minister also underscored the importance of continued coordination among NATO Allies and partners, including through the preparation of unprecedented economic measures to deter Russia from further military action and aggression.

“We are committed to supporting our NATO Allies and partners and resolving disputes diplomatically,” Sherman wrote on Twitter.

The Foreign Minister’s focused on ways to strengthen bilateral relations between Saudi Arabia and Greece, as well as ways to bolster security and combat terrorism in the Middle East and world.

During a press conference after the meeting, Dendias also spoke of Turkey and described its stance on Greece as “the epitome of irrationality.”

“It threatens Greece with war if we apply the inalienable right of expanding our territorial waters, as is explicitly foreseen by the International Law of the Sea,” Dendias said.

Dendias said Greece and Saudi Arabia are committed to protecting and defending International Law of the Sea and the freedom of navigation.