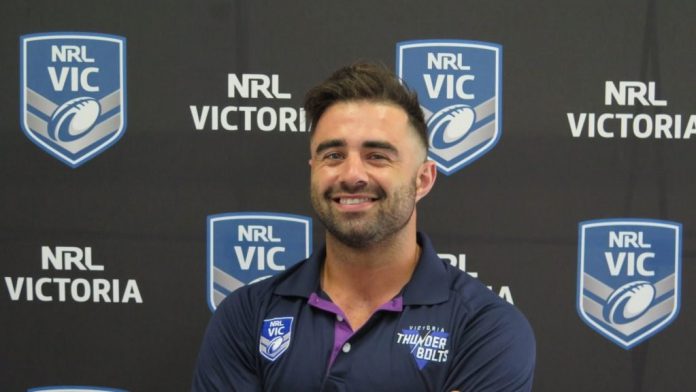 Greece’s national rugby league team, which consists of many expatriates from Australia, achieved an incredible feat when it qualified for the Rugby League World Cup to be held in England from October 27 to November 27, 2021.

When talking to Greek-Australian international athlete, Terry Constantinou, about the difficult conditions faced by the entire Greek national team during the World Cup qualifiers, I unequivocally state that the team’s qualification in the final phase of the World Cup is a miracle for a sport which continues to divide people in Greece.

The Greek Herald would now like to introduce you to one of the members of the national team for the last seven years, Terry Constantinou.

1. Tell us about yourself.

I was born and raised in the provincial town of Gordon, Victoria. As far as I know, my grandmother and grandfather come from a village in Pelopi, Lesvos, but they immigrated to Australia, where they settled in Melbourne for the first few years. Later, they settled in the provincial town of Gordon, where my brother and I were born to a second-generation Greek father and a Greek mother.

2. You grew up in Victoria where the sport of Australian Football dominates and young people of Greek origin also prefer football. But you became an athlete in Rugby League.

Until I was 15, I didn’t play rugby, I just watched it. Until then, I played hockey in a club. Everything changed when my high school started a rugby championship program when I was in my 10th year and that was it. I bonded with rugby. It suited me much better than any other sport. As a member of the Parade College school team in Bundoora, I was selected in the same year for the Victoria Under-18 Mixed Team. Since then, I have stopped playing hockey and have instead been playing in teams of the Victoria Championship, where the level of the championship is not comparable to that of the NNO and Queensland, but it is still quite strong.

3. How did your call to the National team of Greece come about?

My younger brother Matt, who also played rugby, was also very good but left the sport early. In 2012, Matt played rugby in a tournament in Vanuatu, where he met a Greek manager of the National team of Greece who mentioned me. So Matt gave him my details, he gave me a contract with him and that’s how my international career started.

In 2013, I went international by playing against Hungary which we won 90-0 and I had 3 tries, while Braith Anasta had 4 tries. Our coach Steve Tziortzalis had built a very good team with many Greek-Australian players. But the continuation was not as we expected as, in Greece, political and economic interests came in and our National team paid for it because the Hellenic Federation dissolved it and formed a National team with local players, which lost in 2015 from Spain with 76-4.

Fortunately for Greek rugby, the World Federation expelled the Greek Rugby Federation, recognising as its member a new Greek Federation consisting of strong Greek clubs that had created an independent league. The agents of these teams, in collaboration with Greek Australians and coach Steve Tziortzalis, re-established the National team but here the paradox began. The then Greek government did not recognise the new Greek Federation, which was recognised by the World Federation as a member of the Olympic Committee. And so our adventure began.

In September 2018, during the World Cup qualifier between Greece and Malta, we were warned that we did not have the right to train or play. From there, we began secretly working with the police and had secret training. Only two of our agents and Malta knew where the qualifier against Malta would take place. We went to a stadium outside Athens with our phones closed and without posting photos. The game took place and we beat Malta by a score of 60-4. A week earlier, we had beaten Ukraine 28-26 away from home and from there, our appetite for the miracle of qualifying grew. That’s why we chose to give the remaining home games to England.

In May 2019, we beat Norway 56-26, and in November of the same year we lost to Scotland 42-24. Qualifying for the World Cup would be judged with the home game against Serbia. As exiles, we gave the game to our opponent’s home, which we won 82-6, and for the first time in its history, the Greek National team of Rugby will participate in the World Cup with another 15 superpowers.

4. What was the biggest moment of your career with the National team of Greece?

I have many pleasant memories, but the best moments of my seven-year international career were when I first wore the jersey of Greece’s national team and sang with my teammates the National Anthem of Greece. The second moment was when we beat Serbia and qualified for the World Cup.

5. How do you imagine yourself doing in the World Cup?

We do not dream of winning the World Cup but we will go there, we will play for Greece and see wherever it goes. We will face in our group three big national teams, England, France and Samoa. We will try for the best but what matters is that the Greek national team entered the world map of rugby, along with the 16 best national teams in the world.

6. Finally, we asked him about the place of his origin, Lesvos.

I have only been to Mytilene once and stayed only a few hours. I want to get to know the island better. I have heard many good words about the place of my origin. After the end of the World Cup in 2021, I have planned to visit Mytilene with my relatives and friends.

In closing the discussion with Terry Constantinou, he revealed to us that he also fell victim to the coronavirus as he had planned to get married in April 2020 to his sweetheart, but the wedding has been cancelled for now.