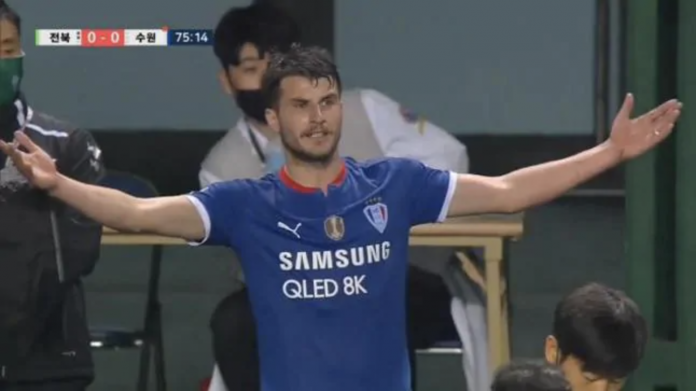 The match was held with coronavirus restrictions in place, with the 42,000-capacity Jeonju World Cup Stadium left baron of supporters. The only people in attendance included South Korea manager Paulo Bento, members of the media and ground staff, who all wore masks.

The match featured Australian pair Terry Antonis and Adam Taggart, last season’s top scorer in the K League, in the line up for the visiting Suwon side.

The former Sydney Olympic playmaker Antonis was sent off with 15 minutes remaining after a reckless studs-up tackle while the match was goalless.

Fans were refused entry for the match, although the club attempted to mitigate their absence by placing enormous banners reading “C_U_SOON” and “STAY STRONG” across the empty seats. Recordings of fan noise were played in the broadcast – with drums, chants, cheers and clapping all part of the mix.

Terry Antonis was raised in the Sydney suburb of Bankstown, born of Greek decent. The former Sydney Olympic and Sydney FC player holds both an Australian and Greek passport.