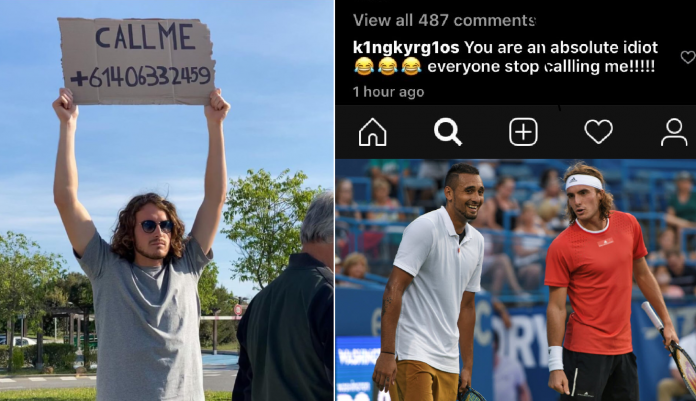 Greek tennis player Stefanos Tsitsipas has pulled the ultimate birthday prank on Australian tennis player Nick Kyrgios as he releases his phone number to his 863,000 followers on Instagram.

The Greek World No. 6 posted a photo on Instagram yesterday of himself holding a sign with the phrase “Call me”, followed by a phone number, presumed to be Stefanos Tsitsipas’.

In a comical turn of events, the phone number held up above the Greek star’s head was his close friend and competitor, Nick Kyrgios, who celebrated his 25th birthday on Tuesday.

Later in the night, after receiving what can be assumed was hundreds of phone calls, Nick Kyrgios sent a message out to his fans on his Instagram story, requesting people please stop calling his phone number.

“I can’t even play music, I cant do anything, please stop calling my cell phone. Appreciate it,” Kyrgios said, ending with a peace sign to his followers.

Yet, none of these earnest messages came close to Stefanos Tsitsipas’ heartfelt prank on Kyrgios, with this prank sure to go down as one of the best among tennis professionals in the past decade.

Unfortunately for Nick, it may be a long time before people stop calling him, possibly enough time for Kyrgios to exact revenge on his close Greek friend.