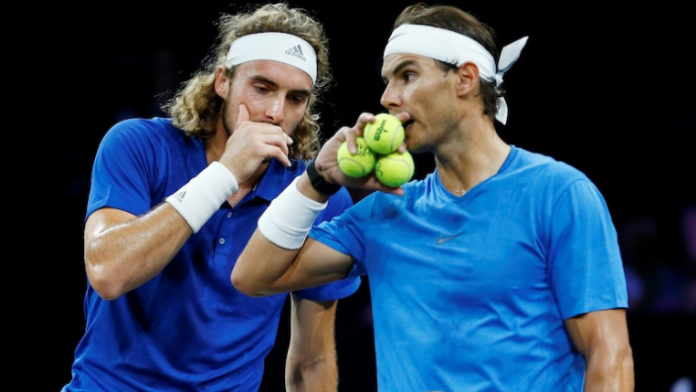 Stefanos Tsitsipas has opened up on the advice he received from Rafael Nadal during the Laver Cup in 2019.

Speaking on Twitter the day after the Spaniard’s history-making Australian Open win, Tsitsipas revealed that Nadal had offered him some advice that changed his outlook on relationships with fellow players.

“Laver Cup 2019 when I happened to be in the same team with Rafael Nadal and I asked him something and he asked me ‘what does make you happy?’,” the 23-year-old revealed.

“And I thought, oh actuality, go for whatever makes you happy.”

Tsitsipas admitted this comment changed the way he interacted with fellow players on tour, including some of his rivals.

“I’ve certainly tried a lot this year to be more open and be more kind with my peers and my competitors,” Tsitsipas said.

The Greek then added that some players still “annoyed” him because of their bad attitude, but he’s learnt to prioritise his happiness above everything else.

“I give them zero attention because they don’t deserve any attention for pretending to be someone they are not…” he said.

Tsitsipas and Nadal were both part of Team Europe for the 2019 Laver Cup, held in Geneva, Switzerland, and played doubles together on day two of the event.

They lost to Team World’s Nick Kyrgios and Jack Sock in a first-to-ten-point match tiebreak.