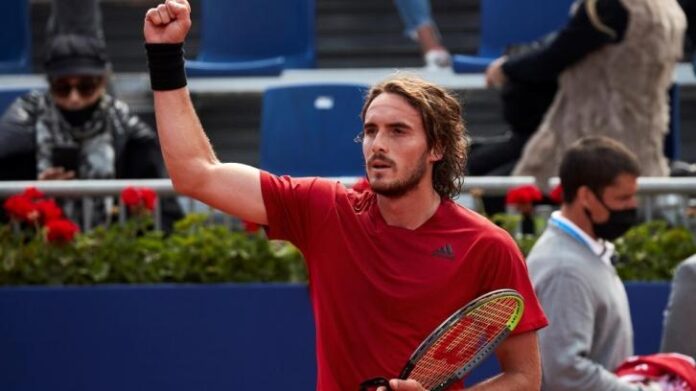 Stefanos Tsitsipas was left saluting the courageous effort of Alex de Minaur after ending Australian singles hopes at the Barcelona Open by knocking out the country’s No.1-ranked player in straight sets.

While Tsitsipas’s 7-5 6-3 victory on Thursday showcased a player currently at the top of his game following his Monte Carlo Masters triumph, it did not give a fair reflection of de Minaur’s bold effort in trying to derail the Greek superstar’s current brilliant run.

After his seventh straight match victory had earned him a quarter-final place, Tsitsipas accepted that he’d really been given a test and paid a warm tribute to the fighting spirit of the 22-year-old Sydneysider.

“Alex was competing for every ball, running left, right, getting every single ball back, playing close to the line, so it was definitely difficult,” said the 22-year-old, who has won his last 13 sets in competitive action.

“Alex is a good competitor, always puts out his best game. Running and getting an extra ball back is actually his biggest strength and it always makes him very difficult to play against.

“But I found ways to go through and qualify for the next round, which was important to me.”

De Minaur’s struggles on clay are well-known and his victory over Alexander Bublik in the previous round had been, remarkably, only the third clay court victory of the world No.25’s entire ATP tour career.

But he took the fight to Tsitsipas, going on the attack whenever possible and sprinkling his game with variety and plenty of drop shots to make the opening set a very even affair until the Greek pounced in the 12th game.

Tsitsipas’s ferocious forehand which brought him a dozen winners during the one hour 24 minute encounter proved crucial as he overpowered de Minaur to break to 30 and seal the opening stanza.

But the Australian fought back to earn an immediate break in the second set, only prompting the No.2 seed to find his best game, break twice and take victory to set up a last-eight meeting with Felix Auger-Aliassime.