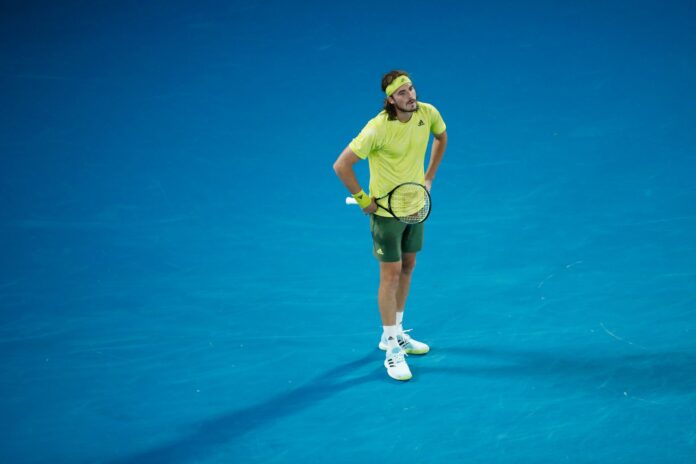 Stefanos Tsitsipas has bowed of the Australian Open after suffering a disappointing three-set loss to Daniil Medvedev, losing 6-4 6-2 7-5.

Stefanos Tsitsipas entered the match looking for his first-ever Grand Slam grand final participation. His incredible display of tennis in his match against Rafael Nadal, where he came back from two sets down, showed that the Greek was finally ready to go all the way in this year’s tournament.

Tsitsipas was lucky to have a one way ticket to the quarter-finals from a walkover, yet still holds more time on the court by 1 hour and 32 minutes. Much of this would surely be from his five-set matches against Greek Australian Thanasi Kokkinakis and World No. 2 Rafael Nadal.

“I got the opportunity to play longer, feel the court, understand the environment that I’m in, so that could probably be seen as something positive,” Tsitsipas said after his win over Nadal.

Tsitsipas was down by a game midway through the first set. Tsitsipas occasionally went for bolder hits in an effort to throw his opponent off, yet Medvedev’s court positioning was in peak performance.

The Russian was clearly the more dominant player in the first set, rarely giving Tsitsipas room to breathe let alone challenge a break point. The set finished in Medvedev’s way, 6-4.

Entering the second set, Tsitsipas continued to struggle against the Russian. Holding back from conceding a break point in his first service game, Medvedev eventually got his wish in the following two games, pushing Tsitsipas to an eventual deuce and game lead.

Tsitsipas at this point began to release some frustration, smashing a water bottle against the ground. The bottle exploded to thousands of tiny water droplets, with the ball kids forced to dry the court. Tsitsipas didn’t receive a warning, yet received a stern talking to by the umpire.

These cheers unfortunately couldn’t help the Greek, however, with Tsitsipas conceding another break point, eventually losing the second set 6-2.

Tsitsipas’ unlucky fortune moved into the third set, with Medvedev gaining another break point early on. Coming in surprise to Medvedev however, similar to Tsitsipas’ match against Nadal, the Greek switched the energy from the game to earn a break point and level the game again.

This positive energy continued through to his next few games, benefiting the Greek. However, the Russian came out in Tsitsipas’ final service game, defeating Tsitsipas 7-5 and completing his dominant victory.