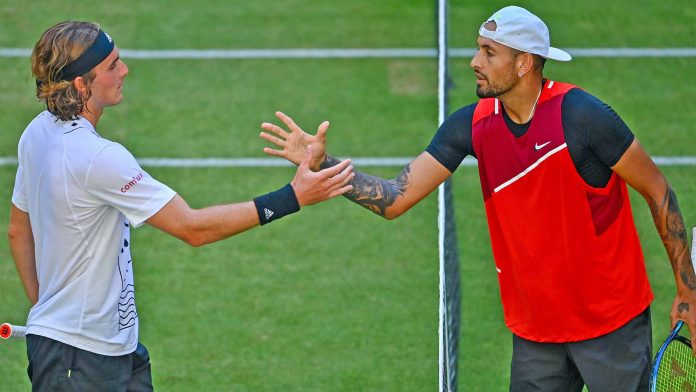 Nick Kyrgios battled back from first-set disappointment to oust second seed Stefanos Tsitsipas with a 5-7, 6-2, 6-4 victory at the Terra Wortmann Open in Halle on Wednesday.

After a strong second-set showing to level the match, the World No. 65 clinched a crucial break late in the deciding set to seal a quarter-final spot on tournament debut.

The match wasn’t without drama. Kyrgios smashed his racquet after losing the opener after saving three set points. He then got into a minor spat with the chair umpire in the third game of the second set, landing himself with a warning for time-wasting.

The win lifts Kyrgios to No. 52 in the Pepperstone ATP Live Rankings.

“Stef is one of the best players in the world at the moment and he’s going to have some amazing results and I’m sure many, many Grand Slams,” Kyrgios said after the match.

“I’m just super excited to move on as well. I want to keep having these big wins on the best courts in the world.”