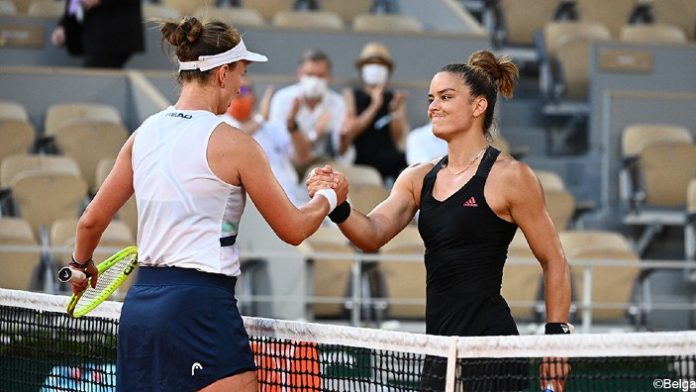 Unseeded Czech, Barbora Krejcikova, pulled off a titanic victory to reach her first Grand Slam singles final at Roland Garros on Thursday, outlasting No.17 seed Maria Sakkari 7-5, 4-6, 9-7 in a three-hour and 18-minute epic.

Krejcikova, now on an 11-match winning streak, saved a match point at 5-3 in the third set with a flying backhand winner, then needed five match points spanning two games before quelling the challenge from the Greek player and improving to 3-0 in their head-to-head rivalry.

Against Sakkari, Krejcikova used a variety of speeds on her groundstrokes to pull her through the challenging tilt, from off-speed slices to blistering backhands down the line. When all was said and done, very little separated the pairing, with Krejcikova the overall aggressor by a hair, having four more winners and five more unforced errors than Sakkari.

After falling behind a break two times in the opening three games of the match, Krejcikova used her mettle to turn around the opening frame. From 1-3 down, Krejcikova won four games in a row, ending that run with a stellar lob on break point for a 5-3 lead.

Sakkari pressured the Czech’s serve to break at love in the next game, pulling back on serve. But Krejcikova came through with aplomb in the final stretch of the set, using her forehand and serve to power to a love hold for 6-5, then breaking an error-prone Sakkari to grasp the one-set lead.

A streaky second set started with Sakkari reeling off four games in a row, using her exceptional speed and tenacity to force errors from Krejcikova. The Czech made a late charge to 4-3, and slammed two aces at 5-3 to hold on and force Sakkari to serve for the set.

Sakkari had to steel herself in a tough game, missing chances on her first two set points. But a long Krejcikova miscue gave Sakkari a third opportunity, and that one was the charm when the Greek pulled Krejcikova into the net, then blasted a crosscourt backhand to force an errant volley.

In the decider, an early break at 1-1 went Sakkari’s way, and she held onto that advantage for quite some time, using down-the-line backhand winners of her own to hold for 5-3. In that very game, Sakkari reached match point after a forehand miscue by Krejcikova, but Krejcikova charged forward to knock a backhand winner out of the air, and the Czech held on from there.

That would prove to be Sakkari’s sole match point as she was unable to hold while serving for the match at 5-4, and rallies became lengthier and more angular as the pair went deeper into the third set, with no tiebreak in sight.

At 7-6, Krejcikova garnered her first three match points, but strong serving and determined speed bailed Sakkari out on each occasion. But Krejcikova grasped two more match points in a scintillating 8-7 game, and after a number of back-and-forth rallies where each woman went for the lines with gusto, it would be the Czech who closed out the match with one final backhand winner.

25-year-old Krejcikova will next play fellow first-time major finalist Anastasia Pavlyuchenkova, after the No.31 seed from Russia defeated Slovenia’s Tamara Zidansek in the earlier semifinal.